T-Shirt of the week

Listening to: Top 40 power ballads on C4 (though I'm not sure that Metallica's 'One' is technically a power ballad).

This week, to entertain you on a Monday, the Caution:Mosh Pit. 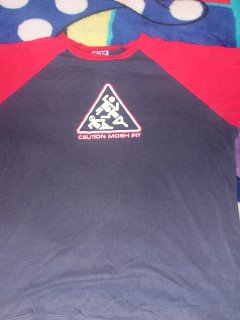 Worn at the Big Day Out in 2002. The image captures perfectly the heaving sweating ecstatic crazy mass of people that is the mosh pit. I have been the poor dude on the floor a couple of times. I have crowd surfed. I was never dumb enough to stage dive. I moshed through most of the nineties. I don't anymore generally. I feel I have earned the priviledge to stand back these days and focus on enjoying the show rather than trying to remain standing. I don't have anything left to prove. Being at the gig is the main thing. That said, I still pit occasionally.
I bought this one because I thought it was funny and understood it perfectly.
I like the Caution label, they've done lots of cool stuff.

Mosh pit survival tips:
Wear hard footwear. Your feet will be stood on. If laced, double knot them, and tuck the bows inside your shoes/boots. An untied shoelace can be dangerous. Just bending down to tie it up puts you in danger of being jumped on. Worse, if someone stands on it, and the crowd moves you away, you're going down, where you are in real danger of incurring injury. To most of the people around you you will be an extra squishy bit of floor.
Empty your pockets if you can. You don't want to be dropping stuff on the floor.
Wear stuff you are happy to get ripped.
Keep your fluid levels up. Lots of mosh casualties occur through dehydration. It gets very hot with all the jumping around and other shenanigans.
Remember to breathe. Seriously. It's really easy to start hyperventilating, given that you're basically in a supercharged aerobics session. Start hyperventilating and going into oxygen debt, and sooner or later you'll be on the floor, which we've already established is a bad place. Asthmatics like me can find this breathing thing difficult. It's very hot, and there isn't a lot of good air around. If you're going to mosh, take your ventolin, before, during and after.
Don't mosh drunk. Be hammered by all means, but seriously drunk no. You'll probably get into some bad karma which will involve physical violence, never mind the increased potential for faling down.
If the crowd moves, move with it. Be split from your friends if required. A moshing crowd is basically a fluid entity, with tides, currents and eddies. It doesn't care that you been standing in the best spot in the venue for the last four hours. If you don't move with the crowd, bad things happen.
If you're a petite, pretty girl, find a nice boy who will earnestly try to prove his manliness by giving you a shoulder ride. You'll get the best view in the house.
Avoid slam dancers. Mutants.
Ignore being groped, boys and girls. The groper probably doesn't even know they have groped you.
If you are being crushed at the front, get a bouncer to rescue you. That is basically their job, apart from stopping stage divers, and if they are doing it well your distress will quickly be spotted. You'll lose your spot, but you will survive. People have died from being crushed in this way. I was in the crowd at the 2000 Big Day Out during Blink 182's set when things got really out of control (they had to stop playing to calm things down), and it was damn scary.
Stupid people will call you weak and unspirited, and they are kind of naff and uncool but earplugs are worth it. You don't lose any sound quality, and your hearing is worth more than a night's entertainment. Your ears will respect you in the morning.
Crowd surfing is fun, and looks cool but can be very dangerous. I've done it, but would absolutely not do it again unless under quite specific circumstances. Getting up is easy, but getting down is the thing, and if you are unlucky you will land on your head from a height of six or seven feet. Prevalent throughout the nineties, it is somwhat less practiced now, as at a lot of gigs if the bouncers get their hands on you post surf you tend to be kicked out of the venue.
Scream, dance, yell, wave the metal salute, sweat through all your clothes, and lose yourself in an experience you'll remember forever.

Mosh etiquette:
There isn't much really. If someone falls, pick them up. Don't use others as launch pads for pogoing. If you care about pogoing that much, pogo on the off beat. That way everyone sees you and you get a momentarily spectacular view of the crowd below as they compress after landing from their own pogoing efforts. Don't slam dance unless everybody else is. It's an excellent way to start a fight after you accidentally punch someone in the face.
Waving a lit cigarette lighter is a really good way to burn your fingertips, and set someones hair on fire if you're really lucky.
Don't hang at the back of the pit waiting for your favourite song and then try to rush to the front. It will take you half the song to get there, and you'll annoy the hell out of everyone you blunder past.
After the gig has finished check out the floor as you leave. You'll find all kinds of interesting stuff, usually in the form of money that has fallen out of peoples pockets.

Favourite Mosh Pit memory:
Being very near the front for Supergroove's set at Mountain Rock in 1995. They opened with "You Freak Me", and the crowd went apeshit. The guy next to me shared his rum and coke. In my top ten favourite all time gigs. It was legendary. That gig also had to pause for safety reasons.

Worst mosh pit memory:
The aforementioned Blink 182 fracas. They were playing the stage by the entry stairs. People were flooding down the stairs to see Blink, preventing anyone going up them, while at the same time hundreds of people were pushing from the back. Lots of people wound up with nowhere to go (including me and Fish), and it got genuinely scary for a few minutes. People were getting squashed around us, 40 meters from the stage. I think people were injured closer to the front. We forgot about watching the gig and instead concentrated on not getting hurt, which was quite difficult. Being in a crowd like that is like being in a rip. You have to remain calm and move with it while looking for a way out. We managed to escape, and took a time out under the bleachers to recover. I think after that the organisers reduced the number of tickets sold for future events. There were way too many people in Ericsson Stadium that day.
Second worst memory is the mutant redneck with the broken arm at a Shihad gig in 2003, who was going to get to the front during his favourite song and wave his arms around, regardless of whose head(s) he bashed his cast on. Mutant.
Posted by Off-Black at 10:27 pm

I have a real love/hate relationship with moshing. I like it - but at the end of the day there are usually morons who break the etiquette rules and distract me from enjoying the music.

It certainly is a good time for boys to act protective and earn man-points with girls. Me and Ange went to Shihad with Adam last night and were quite surprised by his pushiness when anyone came near us. Like our own private bouncer! It was his high-point.

I know it was only a sideline to your post, but having watched bits of that power ballad selection, I reckon that the power ballad has been in decline since the 80s, which were its glory days. Totally missing from today's missing-the-point 80s revival - that's what happens when you leave it to people who weren't even born then...

Oh yeah, I agree - I didn't quite think One fit in. Nice to see the video again though...

Yeah, I like it when boys do the protecty thing. Like the last Shihad gig where the guy with the cast was trying to bash MY head in and Sam spent the evening protecting KIRSTEN. Pah.

You might notice that I am still a little miffed. Sad really, as it was 3 years ago, like let it GO fishy!

Having been in a few mosh pits myself and even a few circle pits I'd like to say that no matter what you do in most circumstances you cannot protect people.

For example at Metallica at Download festival this year, my girlfriend got "fallen" on by some numpty crowd surfing from well back in the concert. We were in some space, she was beside me, I didn't see him coming till he bounced off my shoulder and onto her head. What should have been one of my favourite concerts (20 year anniversary of Master of Puppets) was ruined because Kate got minor concussion, and I couldn't do jack to stop it.

System of a Down at Leeds festival 2003 - one fatality, okay, no-one I knew but i was fairly close to the front when the fence broke and didn't notice a thing. It does go to prove that no matter what you do, if you go to a concert you gotta be prepared to take a few knocks.

I'm getting too old for the mosh.

BTW, hi mate its been a while but I think I'm coming out of hibernation. Might even start the email thing again.

I could comment but it would just go on and on and on.