Some imagery from Wandering around the Petone Fair and Cuba Street Carnival on Saturday: 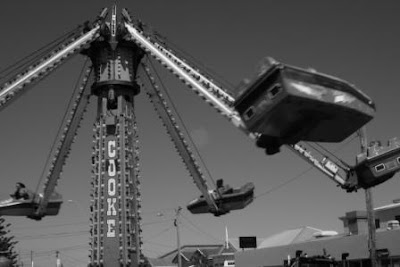 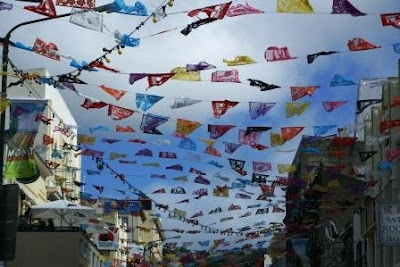 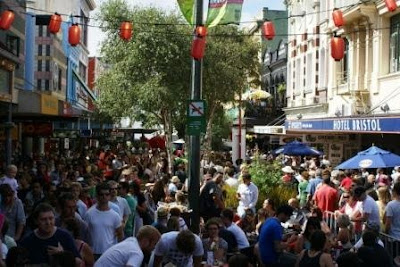 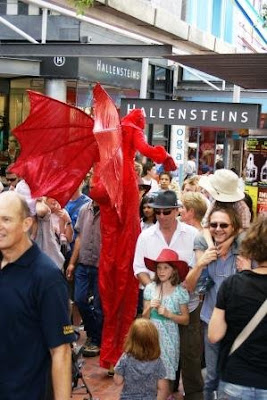 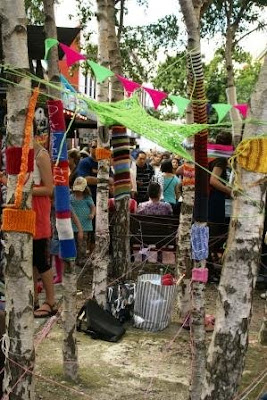 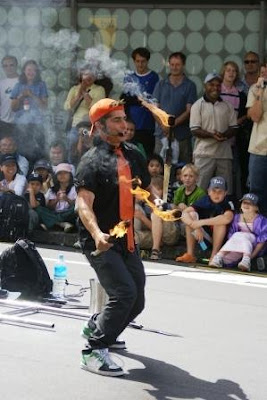 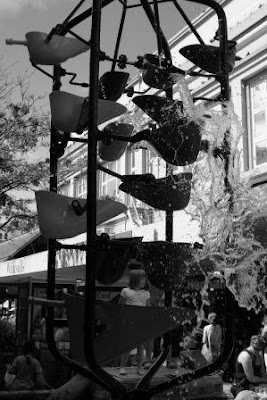 More to come, here and on Facebook. I was three shots shy of filling the memory card by the time the night parade ended.....
Posted by Off-Black at 11:17 pm No comments: Links to this post

Not quite a sunset, but a very pretty sky at about 7:30 tonight. 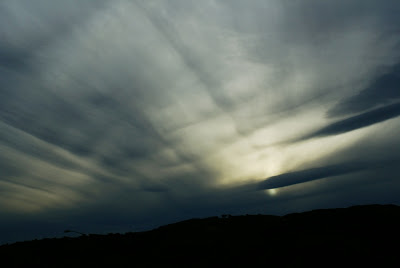 While it can look nice, cloud thickening to the west is seldom a good thing in these parts. Tonight it is quite humid, warm and still. That and the sky at dusk hints there is stormy weather on the way.

Intuition and experience aside, also telling me stormy weather is on the way is metservice.

Some battening down of hatches may in order for Friday.
Posted by Off-Black at 11:24 pm No comments: Links to this post

Listening to: 1965-The Afghan Whigs. As close to a perfect album as I have in my collection, in the way that there isn't a bad track on it.

Firstly I invite you all to behold the glory that is my daughter in her Christening gown (click to biggify): 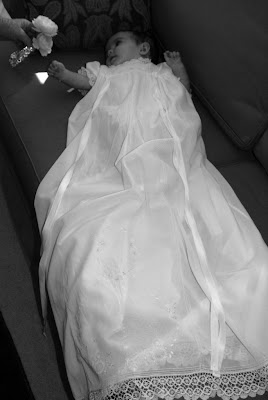 To be fair, it is the family baptismal gown, having been made for my mother (although she didn't manage to wear it for her christening), and worn for most of my family baptisms ever since, including my cousins and my siblings and I, and the various niblings.

Charlotte was baptised yesterday morning at the church her parents were married in (St James Anglican), and made it to the church her father grew up in (St's Peter and Paul Catholic) for a blessing at the evening service. She's come a long way since the NICU.

And she slept through the whole thing. Sometimes I can only marvel at how cool she is.

In other news, I am currently shopping for a replacement zoom lens for my camera. The minolta 75-300mm zoom I inherited from my previous body, has served me well, but may be starting to get a little tired and worn, which isn't surprising given that it is about ten years old, and has endured some pretty rough environments.
While browsing for another 300mm, I hit on the idea of upgrading to something bigger, 400mm or even 500mm. 300mm is only just adequate for the airshow work I like to think I specialise in, and I have been hankering after something better for a long time.
The only problem is that zooms start out expensive, and costs increase exponentially it seems with length. For a new anything 400mm or greater you won't get much change this side of $1200. For 500mm the change comes out of $2000 or more. This isn't for a camera, this is just for a lens.
I'm currently eyeing a compatible 400mm on trademe. The good news is its cheap. The bad news is its cheap at only a couple of hundy, but I am not sure I want to shell that much on what could prove to be merely a learning experience.

***
As noble as it sounds, I am still trying to make riding to work habitual instead of casual. The fact that I live on a 700ft ish hill may have something to do with it. The psychological (and literal) mountain doesn't bother me at the end of the day; it has the most effect at the beginning, when I am lying in bed trying to convince myself to ride.
Still, I rode today, and had the immense satisfaction of passing 50 or so jammed cars on the motorway at the stately pace of 30kph.

Due to the christening, I missed out on round the bays. I did it last year, purely as a fitness test. I figure it could become a useful annual ritual in this regard. Not Kate did it this year, although she walked, the pansy. That said, had she run, the story might not have been nearly so entertaining.

I watched the new 'Top Town' last night, and was immediately disappointed that the nearest team to my home (and hence the one I was obligated to support) was Masterton. Masterton! One of my least favourite towns (for no particular reason, I just don't like the place. I like the airfield at Masterton, but the town itself has never enamoured me). Still, they got eliminated, so next week I can support whomever my fickle ways decide.
The original series from the 1980's is now a fading memory. It used to be a travelling thing, I remember that, since the new one appears to be exclusively located at a Christchurch water park. The new challenges appear to be all water borne, which also differs from the original. I loved the original, and in the great tradition of lacklustre remakes, I was expecting the new one to be not as rewarding. Luckily I was disappointed, since the new version is not altogether bad if sunday night silliness is you're thing.
That and sprains. While the padding should eliminate lacerations and broken bones, it seems tailor made for hyper extension or contraction of limbs and appendages. Which adds to the visual fun I suppose. Wouldn't be any fun without painful looking and inelegant falls and sprawls.

And finally, a shout out to the legendary D3vo, who is parking up his blog for a while. As a constant source of interesting reading, and one of the inspirations for this blog, its been fun. I offer a metaphorical salute, and await its return when the time is right.
Posted by Off-Black at 8:11 pm 2 comments: Links to this post

Listening to: Led Zeppelin III, which I found at the Warehouse for $9.99. Bought mainly because it has 'Gallows Pole' on it. Score!

So when it is a hot humid windless moonlight night in Tauranga, and it feels like you're in Fiji rather than New Zealand, and its too hot and sweaty to sleep, what do you do when you are staying in a place like this? 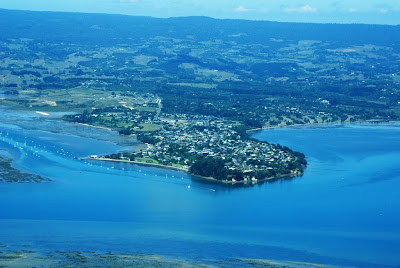 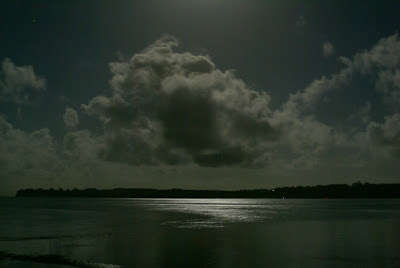 You're awake anyway, may as well explore new surroundings 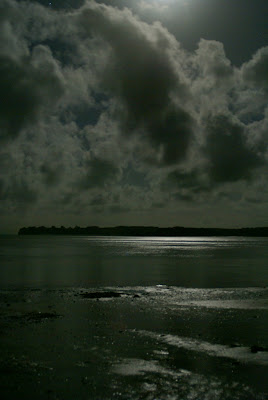 Its amazing though what can be acheived when you leave your tripod at home and have to improvise. Trees and washed up tree trunks become your friends 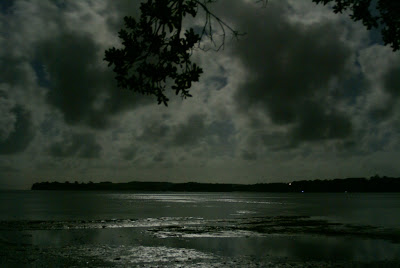 The stillness and silence was absolute, and almost alien to this Wellingtonian. Very cool.
Posted by Off-Black at 11:23 pm 2 comments: Links to this post

The Art of Nails

Listening to: Further down the spiral-Nine Inch Nails

A brief primer to the sport of Nails

As introduced to this land by a certain WA Reptile

The equipment required is illustrated below: 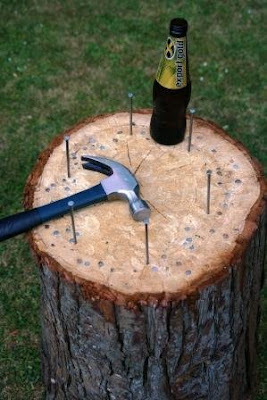 In this case, the game board is close to ideal size, however any flat circular wooden surface wider than a dozen centimeters can be used if required, provided the surface to be struck is end grain.

Once willing players are found, each can choose a nail for themselves, and marks it by placing a finger upon it. This is important, as it signifies to the player which nail must remain standing in order to win the game, and of course which nail the player should avoid hitting.
Here the nails have been chosen, and the hammer is visible being elevated ready for starting player selection: 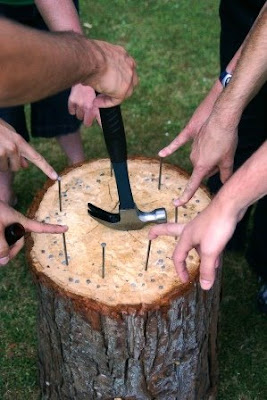 The hammer is spun to select the starting player: 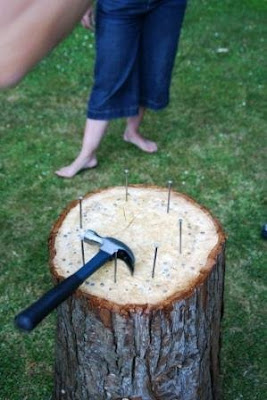 To successfully complete a throw, the hammer must complete at least one 360 degree evolution in the air, before being caught on the handle only. Catching above the handle or dropping the hammer forfeits the throw, and the player must consume the amount of drinks being competed for. The hammer must be thrown, caught, and wielded in one continuous movement. Pauses for target selection and grip adjustment are not permitted, and will result in a forfeit of the turn, and commensurate consumption of drinks.

If a nail is struck and sparks are generated, all players must consume one drink.

If a nail has been struck so that either; 1. A fingernail cannot be inserted under the complete circumference of the nail head or 2. the nail does not cast a shadow, that nails player is eliminated and takes no further part in the game.

Disagreements regarding eliminations can be referred to the other players for adjudication.

When all but one nails have been eliminated, the owner of the last nail standing is declared the winner.
Here the In Front, and Behind The Back throwing techniques are being demonstrated: 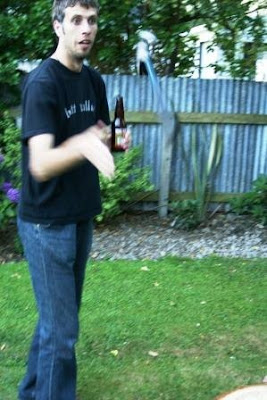 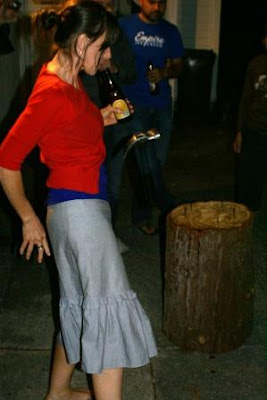 Safety equipment can be employed if available, but is not mandatory. Here two players demonstrate correct use of safety equipment: 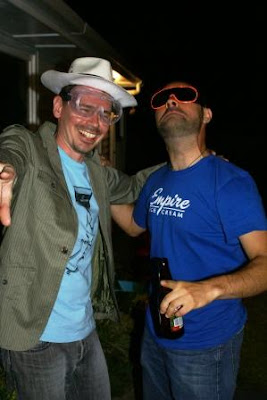 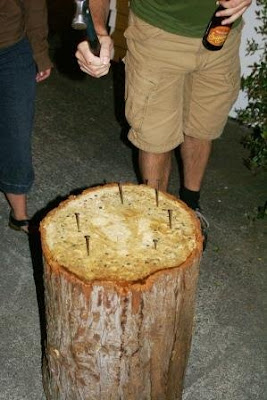 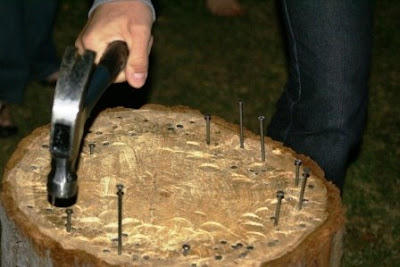 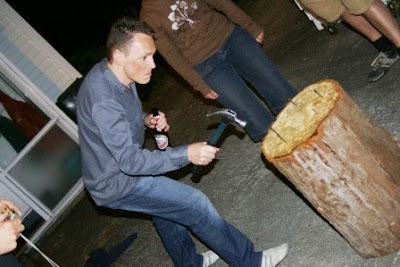 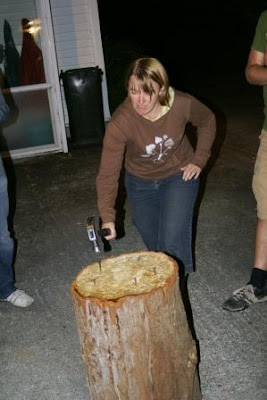 For added interest, the game board may be soaked in beer. This has been shown to both aid accuracy and increase spectator participation via the splash effect when a nail is struck: 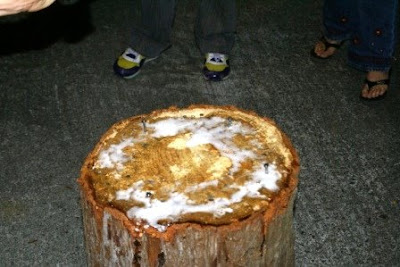 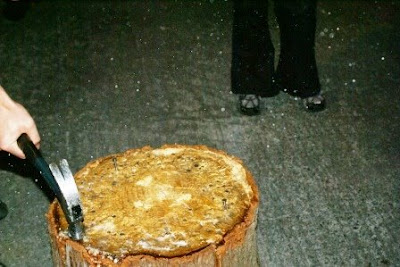 Although entertaining, repeated rounds of nails combined with beering the board can quickly decrease the amount of beer available: 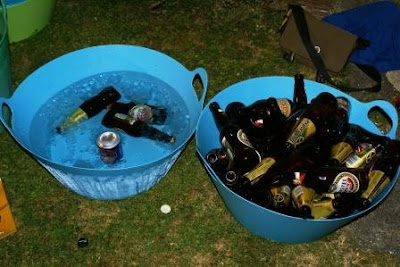 This concludes the description of the basic Nails game.
Other variants of the basic game suitable for more advanced players have been discussed if not yet evaluated:
Big Bang Nails
Each nail is coated in gunpowder prior to gameplay commencing, crowned by a capgun style explosive cap. Recommended for night-time competitions.
Strip Nails
May be employed when the beer runs out. Single throws only allowed, with items of clothing removed replacing drinks consumed
Run-up nails
Players are allowed to stand at some remove from the board, and approach the board at a run to deliver their strikes. The hammer must remain in motion at all times, preferably in a Pete Townshend arm windmilling action.
John Woo nails
Two hammers are employed, one in each hand. Simultaneous throws double the amount of hits on offer. An extra hit is awarded if strikes are delivered while diving sideways toward the game board. Delivering strikes with the hammer held sideways will result in a turn forfeit.
Industrial Super Heavy Duty Action nails
Employs railroad spikes and 10 pound sledgehammers, and ideally a fir tree stump or larger. Handle restrictions relaxed to include the whole handle, as there is no separate grip for these hammers. All basic throws allowed. For expert players only.
Happy Nailing everyone!
Posted by Off-Black at 9:26 pm 1 comment: Links to this post