Thoughts on the Olympic Opening Ceremony

- It worked. Potentially difficult conceptually but it was brought off well, and I really enjoyed it. But then I am fully uncynical about the Olympics, so am a bit biased. It was a marked change from Beijing.

- That said bits of it were more effective if you knew your references than others.

- The hill  built in the stadium was cool, especially as it appeared in close ups to have real dirt and grass on it.

- Watching it free to air meant some context was missed, as well as some setpieces, due to ad breaks. I only found out afterward what the whole "Abide with Me" thing was about. although I thought it was a lovely rendition.

- The setpiece of forging the Olympic Ring in the stadium was awesome. And the doves on bikes.

- This is the first time I have watched one of these things with a child alongside who needs things explained to. Particularly why daddy found the pogo-ing punks on pogos so hilarious (that was just inspired).

- The music era thing was cool (and made me think that while Rock music was technically invented in the US, it took the British to make it properly kick arse).

- I love it when directors choose good popular music as soundtracks (and in this case some pretty alternatively informed selections) for big events. It is so much easier to engage with music you already know and love than some over-earnest, usually over produced and slightly cringy commissioned piece you will likely never hear again. Plus hearing relatively obscure album tracks and recognising them from albums you own always feels ego-stroking good.

- Using movies as well was cool.

- I liked that there was a feeling of a deliberate decision on the part of the producers to make the ceremony both non traditional, knowingly self deprecating, and more interesting for certain demographics. Namely mine :).

- The Queen gets kudos points for participating in the James Bond parody, but loses some for appearing totally disinterested in person at the ceremony itself. She might have been having a good time, but looked bored, most notably during the lingering close up of her checking her nails while the Great Britain team entered the stadium. You could almost hear the producer screaming "Get me another shot, any shot!". 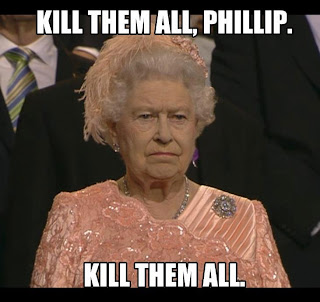 - The Parade of Athletes is always fun, for the uniforms (especially the Czechs in gumboots) and seeing people buzzed to be there. Although according to the three year-old the Fijian flag bearer was naughty for not having a shirt on. I'm sure though that many interested viewers might disagree on that point

-I also noticed the out of uniform Indian at the time, and wondered what was up.

-Adding to the non-traditional aspects, both the lighting of the cauldron, and the cauldron design itself were brilliant. Simple but clever concept. 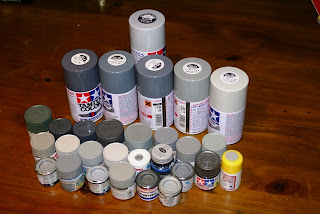 Prompted by a facebook conversation, a quick audit of my paint stash reveals only 31 shades of grey (there are a couple more I found when I put the paints back).

I do know all of them by sight though (along with probably a dozen more at least). Modelling camouflaged things tends to warp your colour palette descriptions a bit.
Posted by Off-Black at 10:15 pm 4 comments:

Mythbusters tried (when they shouldn't really have bothered, because it isn't a myth), but they really didn't do it right.

This is how you break windows with a supersonic aircraft (in this case Brazilian Mirage 2000's about a week ago): 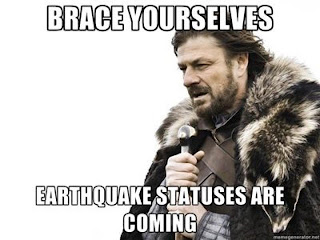 One aspect of earthquakes these days that we never experienced as kids is the social media one. Within minutes of the earthquake the other night we were on-line, not so much to participate as to seek information. Who felt what, and where? Was this local, or something bigger somewhere else?

A friend of mine astutely pointed out the following:


There are 3 groups of people on FB this evening. The first are those who are commenting on the earthquake with a few Fbombs thrown in. The second group are those sharing articles and info re readings and depths etc. or quoting friends comments from other pages. And then there are those who are critiquing the speed at which one was able to gather data via various sources.

I found myself in all three groups. I posted a "wow that was long" status on facebook then got down to the critiquing, even of my own observations (my allowance for time dilation in estimating the quake duration was way off ), and participated in a thread on who had and hadn't used twitter as an aggregator (I'm not on twitter, so no).

We didn't go as far as this guy who tweeted during the event itself, but were quickly on facebook and other forums while waiting for the official word from Geonet. That both the power and web access were still up to enable this was a good sign, and we found it a useful quick and dirty way of getting an idea of what was going on, before adding to the discussion ourselves. There was a "Me Too!" aspect (and if I'm honest a "First!" aspect as well :) ) as people informed and collectively reassured each other, but what was more interesting was the way the discussions broke down into comparison and analysis. This particular (anecdotally at least proven to be true) XKCD also came up: "Seismic Waves" .

It was both a "we really are living in the future" moment, and a great example of how web can really work.

PS it's an Earthquake

So about this time last night, I'm sitting at my workbench in the study, Fi is pottering in the kitchen, and the kids are asleep upstairs. All is quiet when the model shelves beside me start rattling. They do that from time to time in response to low frequency noises like passing vehicles, the washing machine, or earthquakes. Whenever they start their noisemaking my earthquake spidey senses go all a-tingle, but they usually stop after a second or two and I go back to whatever I was doing. This time they don't stop.

After taking a second or two to tune in I notice that we are indeed rocking gently to and fro, and having an earthquake. After discussing this with friends later we'll figure out this was the P wave arriving and doing it's thing. The whole P and S wave (link) aspect of earthquakes is something I learned years ago but haven't thought about for a while and we're about to get a reminder of how they work.

I note the time for later reference, and that Fi hasn't said anything, so I calmly call out "earthquake" to the kitchen without leaving my seat. She doesn't hear me, so I call out again, and this time she responds by rushing to the doorway and urging me to do the same. That I have time to call out twice isn't something I notice at the time, but in hindsight it means the tremor has already gone on longer than usual. It hasn't got much worse yet and I'm thinking it's a pretty good nudge, (but not that bad) but it will probably end in a few seconds so I'll see what it does and ride it out. Fi is a little less blase, and getting insistent, so I get up and head to the doorway.

I've just gotten to the doorframe when the S waves start arriving and the shaking really kicks off, the worst we've ever experienced in this house. Fi suggests we head upstairs to get the kids, but I'm still thinking this will only go for a few more seconds (ignoring the fact that this is already one of the longest tremors I've ever experienced), so again suggest we ride it out. That's when the shaking kicks up another notch, we hear something glass fall over in the kitchen (later determined to be empty beer bottles in the recycling), the house starts creaking and we are both heading upstairs to rescue the little ones. Quite what we would do if the house started collapsing at this point I haven't figured out, especially having just left a spot of relative safety, but parental instinct is a great driver. We've just gotten to the top of the stairs and are about to go charging into the girl's bedroom to grab one each when the shaking eases and stops, followed by that wierd period when you aren't quite sure if the shaking really has stopped, or your adrenalised senses are tricking you into thinking it is still going.

Having determined that the land has returned to a state of quiescence, we look into the girl's room and immediately have to drop our voices as we calm each other down. The bebes slept through the whole thing. One of them may have rolled over, but that is all :).

It turns out to have been a deep magnitude 7.0, which is starting to get up there in terms of destructive potential, but luckily the depth mitigated it a bit. A much lesser magnitude, but many times shallower tremor wrought all the havoc in Christchurch last year.

And if you want to hear what it sounded like in a Wellington church, the earthquake was captured during a recording session here (lasting a lot longer than I realised at the time).