Funny how whenever the word 'Unmissable' appears in a promotion for an upcoming TV programme, I am instantly disinclined to watch it, and somehow make time to miss it.

Similar sort of thing to how Christmas music in a shop makes me want to leave the shop instantly rather than stay and spend money in it.
Posted by Off-Black at 10:57 pm 1 comment:

Listening to: The deranged melange that is 'The Island' on TV in the lounge.

This post brought to you by sunny Lyall Bay. 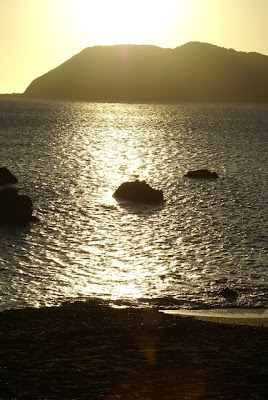 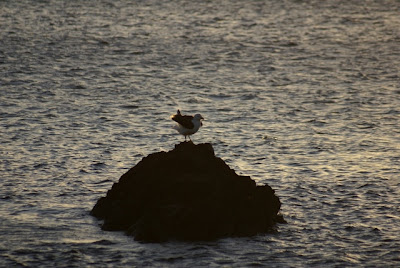 Sensing Ben Harper
I have this thing I do periodically. For no particular reason, I will get a song in my head, then when I turn on the radio, that song is played almost straight away. I have been doing this since childhood. The most recent occurence was on Friday, when I thought 'gee I'd really like to hear the new Ben Harper single today', and lo it was the very next song to air. I'm not claiming to be psychic at all, but it is an interesting phenomenon that I don't at all understand the mechanism of.

Is post modernism dead?
So while attending Urinetown at Downstage on Friday night, a question occured to me. Urinetown is a satire, of several things but largely of the musical genre itself, and is loaded with self referential and knowing gags and humour. Which got me wondering. Is acknowledgement and mocking of cliche in danger of becoming a cliche itself? The show was quite good and never dull (and I am known for loathing musicals), although I thought some of its points about consumerism and environmental calamity and wannabe revolutionaries maybe went over the heads of some of the audience. And Rima Te Wiata is way taller than I thought.

Stink
Attending the musical meant I missed out on Not Kate's Birthday dinner, although this was partly offset by catching up with folk for drinks later. By all accounts it was a pretty good lash. I am rueing missing out. I hate missing out on things.

Drunk detection
I use the room is spinning sensation as a key indicator that I have had too much to drink and need to engage in hangover prevention techniques. This is tested by closing the eyes. If spinning is felt, nausea is usually imminent....which can be fraught if you happen to be really tired. Anyway, since childhood, I have exeperienced the same sensation periodically when very relaxed. And in that sober state, I really enjoy it. Quite why I find it so unpleasant after drinking I have yet to fathom.

Shouldn't be but is
Paul Henry on TVones weekday breakfast show appears to be developing a cult audience. I know I shouldn't, but I find him quite watchable, and so do other unlikely audience members I have asked about it. I suspect I would find the guy quite unpleasant in real life, but he his probably the most free speaking broadcaster on TVNZ at the moment, and handily offsets the seemingly endless parade of lookalike blonde dishes who occupy the right hand side of the screen.

I haven't seen any news of any kind since Wednesday. Anything happening I should know about?

Looks like Lauren left a couple of weeks too early. 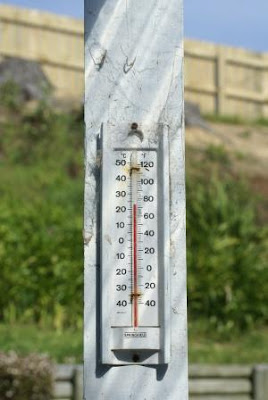 Nice warm for November day, went to the beach at Days Bays in the afternoon. 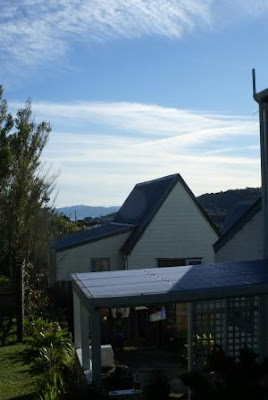 And on returning there was no option but to fire up the barbecue and open the season. NB, those are mushrooms, not burgers. 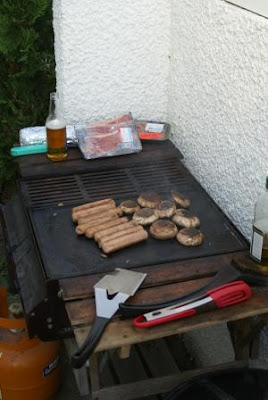 Thunder! Lightning! The way you look at me etc etc

First ever attempt at photographing lightning, courtesy of the arrival of tonights cold front.

I read about how to do this years ago, and no longer being limited by film I decided to give it a go.

Helps if you point the camera in the right direction though. 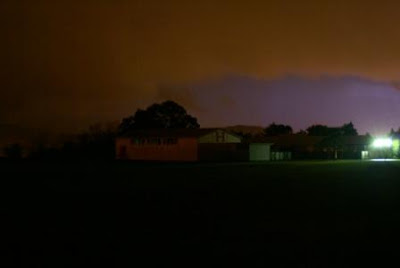 Lots of classic forked lighting about but didn't manage to get any in frame. Actually I think I did here, but it was too bright for the camera settings. Need to work on that. 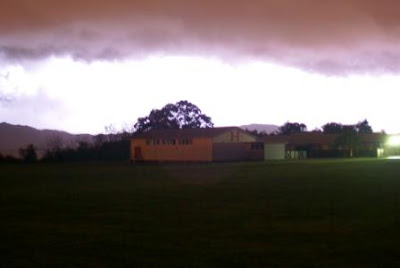 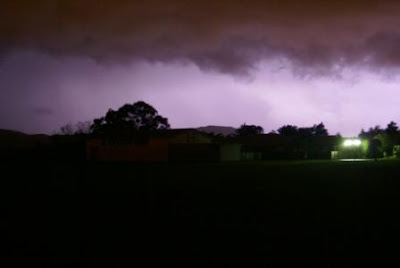 Backdrop courtesy of Kelson School, with their sturdy new fence providing a handy steady base to brace the camera. Would have got more, but I was either looking the wrong way, or scurrying to get inside as the rain started.

A picture is worth a thousand words. Apparently.

Really I can't argue with that. Showing someone something is generally way more effective than describing it.

So having established that, I got to wondering how much a picture of a thousand words was worth.

First of all, a picture of a thousand words had to be created. And here you go: 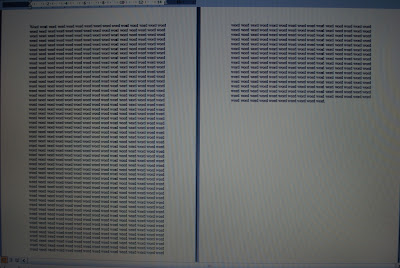 You can count them if you like, or just take my word for it (cue comedy drum splash).

Comic value
Hard to define. This can range from none to priceless. Up to the viewer really, but I at least found the concept moderately amusing, to the point of chuckling quietly to myself at various times when toying with the idea.

Philosophical value
Obviously I found this intriguing enough to blog about it, so clearly not valueless then. The value of a thousand words philosophically (or perhaps in this specific case metaphorically) clearly depends on the chosen words, their meaning and intent, and distribution and understanding.

Surrealist value
4 giraffes, the radiator grille from a 1976 Leyland Mini, and a dog eared signed original edition of "The hitchhikers guide to the galaxy". So there.

Wage value
Given the legal minimum adult wage in New Zealand is $11.25 an hour, and the image took around ten minutes to create, plus about twenty minutes to blog about, lets see, someone owes me $6.65. At least. Creativity of this calibre normally commands a higher rate.

Economic value
I had a bottle of beer while putting this together, $13.99/doz, divide by twelve, thats roughly $1.15 to the brewery then. So by that tense, it is worth at least $1.15, since I am out of pocket to that effect. Although cost is not necessarily the same as worth.

Ecological value
I am using electricity for an arguably pointless and wasteful exercise. Never mind the carbon footprint for the brewery, and the means of delivering the beer to the supermarket. Ecologically then, the value is probably negative. However, comic value can offset this, improving your immediate environment by making you laugh, so it is not all bad.

Memorable value
Again in the hands of the reader and highly linked to the relative comic value. Instantly forgotten, mentioned in conversation now or years later, linked, making blogspots 'Blogs of note' list?
Impossible to gauge without the passage of time.

Associative value
Value inherent due to the fact that I created it, or that it is viewed via the various links I appear on. Maybe that should be 'Ego value'.

Right, I've just about run out of ideas on this one, so here endeth the post.
Posted by Off-Black at 11:26 pm 5 comments:

Listening to: Time on Earth-Crowded House

To Lauren of Canadia, who departed for Brisbane and eventually points further north and home this afternoon.

To my Uncle John Rodden Tarleton, who we laid to rest at Taita Lawn Cemetery today. After a life that could never have been called easy, yet lived to the full extent of effort and possibility, he passed away in his sleep early on Thursday morning. I will be forever grateful for the insight he gave us into living with a disability, and how much we take for granted.

When we were young

Listening to: The Radio. 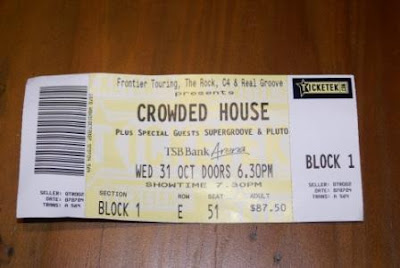 Last night I indulged in Time Travel. For such an awfully acousiticated (is that even a word?) venue, the Queens Wharf Events Centre (which it will be, regardless of what TSB labels it) somehow manages to have character. Of a sort.

We arrived halfway through Pluto's set, and for an act that sounds pretty polished on radio, they were curiously uninvolving live. The Muttonbirds were the same. Great studio sound, but kinda boring on stage.

This was demonstrated by Supergroove, who within thirty seconds of starting their first song (Next Time), had blown Pluto completely off the stage, beaten them up with their guitars and horns, jumped up and down on their twitching bodies, and then backed over some pizza with a car and made them eat it. The difference between the two in terms of stage prescence was like night and day.

Che Fu and Karl Stevens make for one of the oddest front pairings I have ever seen, yet somehow they are perfectly complementary. Supergroove looked nothing like an act that has been in the wilderness for more than a decade. For a few moments I was 18 again, in the front row on a hot summer evening in January 1995 at Mountain Rock, sharing a badly mixed rum and coke (in a plastic coke bottle) with some guy I had just met, caught up in the moment, as the band started their set with 'You Freak Me'. For a while in the mid 90's, it felt like Supegroove was the default party soundtrack, and seeing them play again brought back a lot of excellent memories of good times. Like a lot of punters, for me seeing Supergroove again was almost as much of a draw to the gig as seeing Crowded House. It was a Crowded House gig, but the T-shirt I bought was the Supergroove one.

Crowded House played a free gig in Palmerston North on Waitangi Day 1995 or 96. I had the opportunity to go, didn't, and rued it. While their recorded work is brilliant, if a little 'safe' feeling at times, they built their reputation largely as a live act, and I didn't want to miss out this time. Like Supergroove, they didn't disappoint. While Paul Hester will forever haunt the stage and always be missed, the new drummer Matt Sherrod brings a different prescence and feel to the classic tracks. Live the songs are punchier and rockier, and just as good. The mix of old and new material was good, in a set that lasted over two hours. No complaints about value for money. And the reputation is deserved. They are a really good live act, involving and acknowledging the crowd, jamming, improvising, telling stories, trading banter. After all this time, it was nice to see one of my longest term favourite bands for the first time (I've seen various Finn combinations before, but never Crowded House).

While the venue isn't that great (honestly, the sound quality really sucks. When its not echoing its reverberating), I've been to a few really good gigs there. That is where the character comes from perhaps. A hair product meltingly hot night in February 1998, right in the mosh pit for Pearl Jam. A somewhat milder evening in 1996, with Billy Corgan's curious "I'm gonna stay on stage after the rest of the band has gone and tune my guitar for ten minutes while ignoring the crowd" finale to a Smashing Pumpkins concert. A mellow and chilled out viewing from the higher seats for Ben Harper. Some retard casting doubts on my manliness for wearing earplugs at Audioslave.

I love a good gig. The crowd singing along, the roar of recognition when the opening chords of a favourite ring out, the vibe, the atmosphere, hopefully the band having a good time, watching how the music is created, the whole thing. There are few things better than seeing and hearing your favourite music played in your prescence by those that created it.
Posted by Off-Black at 10:10 pm 1 comment: