I found myself revisiting this picture the other day. I took this when I was thirteen, in a British Airways 747 high over the Arctic on the way from London to Los Angeles on my first overseas trip in January 1990. I was fascinated to notice the contrails from the engines were forming so close to the aircraft that they could be seen from inside, rather than trailing behind a little. Besides being a cool process to watch, it was also a great indicator of just how fast we were travelling, something you don't often get in an airliner. So I took a photo. 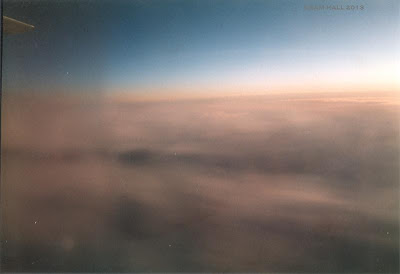 At top left is the port horizontal stabiliser of the 747. The contrail from the port inboard engine is in the bottom third of the frame, with a gap between it and the outboard trail above. It's indistinct and imperfect, but it's one of my favourite old photos. That was a cool experience.

Many years later, a particular conspiracy theory involving contrails would arise and catch my attention, as it confluences a few interests of mine. Basically the "Chemtrail" theory as it's known asserts that the trails you can see in the sky aren't the normal by-product of humidity and engine exhaust or aerodynamic processes, but some kind of secret evil plot to spray chemicals from altitude and affect the masses below, via depopulation, weather control, or whatever particular flavour of un-sense is being propagated that day.

Beyond the fact that on the scale alleged it's logistically impossible, technically implausible, and scientifically idiotic (among a host of reasons for it's utter improbability), the people that promote it are usually utterly uninformed about the finer details of aviation, meteorology and chemistry. If they were informed they probably wouldn't fall for this crap, but there you go. While the unfounded nonsense being promoted and sold as fact and 'truth' (and if you question the 'truth', you're either asleep, a sheeple, or a shill) is annoying to someone who actually knows what they are looking at, and the threats made by some of them against contrailing aircraft and pilots are actually unnerving, occasionally (well more than occasionally), there is some amusement to be had. Usually because the chemtrailers are so unaware, and aren't actually knowledgeable in the subjects they lecture on, not only are some of their "revelations" and speculations hilariously inaccurate (I've seen them ponder for days over the role of a "mysterious" aircraft seen on google earth that was visibly unflyable to name but one example. It was a grounded airframe used as a training aid), they are also easily pranked.

This video frequently does the rounds as 'evidence'. It's a USAF KC-10 aerial refuelling tanker, being videoed from another KC-10, allegedly "spraying" evil chemtrails while the pilots openly discuss it. Note the manipulation when the "stills" are taken and elsewhere.


Unfortunately for the chemtrail argument the original video was shot and posted specifically to satirise chemtrailers. And they fell for it, and continue to do so en masse. See if you can spot the differences:

The trail is an aerodynamic contrail, formed by an interaction of pressure, temperature and humidity as the aircraft passes through the air. The trail varies as the immediate local conditions do. It's a well known and understood phenomenon obvious to anyone who knows about it. Chemtrailers don't. There are no "nozzles" on the wings. What was identified as such are housings for mechanisms that raise and lower the flaps (and anyone can look up a diagram of a DC or KC-10 and verify this for themselves). There is a theory that because the maker of the conspiracy version isn't a native english speaker, the sarcastic tone of the commentary may not have been noticed. You can make your own mind up on that one.

If those promoting the chemtrail theory were actually expert in aircraft anatomy, aerodynamics, weather and science like they think they are, and presented it with properly derived evidence, verifiable and obtained through validated methods they might have more credibility. But they aren't, and they don't have any. As well as the wrongness of what they promote, I'm also fascinated by the disconnect that means all of the rational evidence that they are wrong is not only uninvestigated and ignored, but routinely dismissed as "disinfo". Like followers of many scientifically illiterate conspiracy theories, it's adherents are choosing to be ignorant. In a world where basic scientific literacy and critical thinking skills are getting more and more important to have (in my view at least), that's just depressing.
Posted by Off-Black at 10:44 pm No comments:

So a week ago, it's Friday afternoon, and I'm at my desk, the aftershocks from last month's quakes have pretty much died away and things have been feeling normal in that regard for a little bit, when this bad boy happens, and suddenly I'm under my desk waiting for it to stop. Which seemed to take ages. This was the first of the recent series I have felt somewhere other than at home, and away from the bedrock of that locale it was a lot more intense. That was the first time I've ever for real jumped under a desk or table in an earthquake. And I'd do it a couple more times that afternoon as more aftershocks came through. Not fun.
Posted by Off-Black at 9:30 pm No comments:

So driving home after a stressful day, with a lot on my mind, and I look in the passenger seat and my two year old is sitting there singing "Wheels on the bus" complete with hand and arm movements, happy with not a care in the world, and this song starts playing on the radio, and suddenly everything's cool. It will be spring soon :)
Posted by Off-Black at 9:05 pm 3 comments: