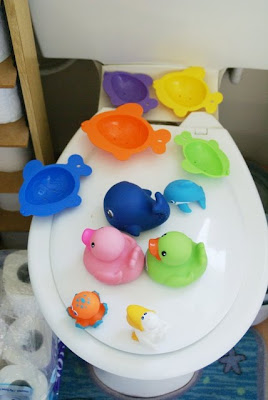 In the sense that only the architects know their true purpose...*

*Charlotte came up with this careful arrangement of the bath toys the other day while Fi was showering. Note they are all facing the same direction apart from the green fish....random mistake or something deeply significant to her world? I asked but she wouldn't tell :)
Posted by Off-Black at 7:19 pm 6 comments: Links to this post

So I am 34 today, and on doing some digging as one does, I have discovered that not only do I share a birthday with this guy, oh and er this guy; 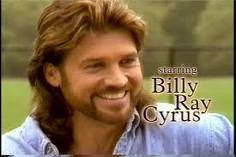 as well as a bunch of legends such as Ivan the Terrible, Saburo Sakai, Mad King Ludwig, Martin Amis, Vo Nguyen Giap, Gene Simmons, Tim Burton, and Claudia Schiffer, I am also apparently the exact same age as a certain swedish actor, presented here in a posey pic for those so inclined: 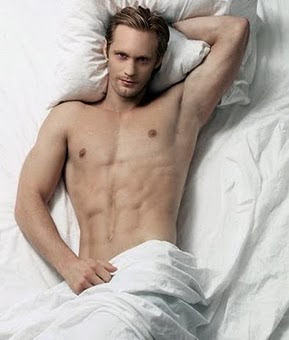 Or looking slightly more manly if you prefer: 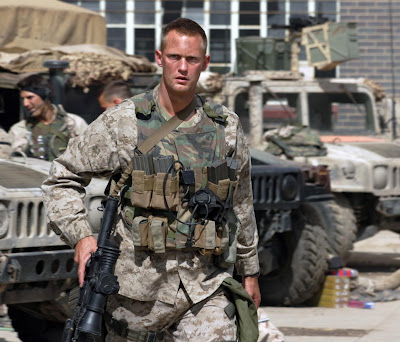 I could probably pull off the second look easier than the first methinks...
Posted by Off-Black at 8:41 pm 6 comments: Links to this post

Possibly the greatest Arcade Racer ever

I'm talking about Daytona USA (wiki), created by Sega in 1993 and 1994, and still in the arcades after 17 years, which is like a bajillion in videogame years. The game was so good it remained popular despite a supposedly superior successor being produced. There were single seat units produced, but the linked pair cabinets were much more popular, and could be linked to others, enabling easy multiplayer mayhem (the most I personally saw linked was 8 players, but I'm not sure what the upper limit was).

And a while back, I was quite good at it (car racing games kinda being my thing arcade wise). I used to play a lot, before movies, if I had time to kill, or just for its own sake. I spent a lot of time (and admittedly coin) behind the wheel of one of these, and found this video of my favourite track (the 'Expert' one) on youtube the other day. Despite the awesomely bad video quality, I quickly got back into it (after thinking initially it was sped up, then remembering it wasn't).


And noted that I was faster than the player on screen (his technique is good, but he spends too much time on the grass), which was heartening in an 'I love me' sort of way (from memory for the record, my fastest opening lap was somewhere around 1:38, my fastest flyer around 1:33). I was quick, and still am when I venture back in the saddle (without using the later cop-out 'Turbo' tweak which could make any player temporarily competitive), but not as warp factoring wow fast as this guy:


Even on my best days I could never pull out laps like that (while I drive exactly the same as him on most of the circuit, he would absolutely nail me on a couple of corners. I never quite got the hang of drifting in 4th gear like he does).

I still have a lap occasionally, but not like I used to. Still a great game, and still capable of entertaining and generating a rush for the player.

Prior to Daytona, I got into its immediate predecessor, Virtua Racing (wiki), which not only looks vastly more dated than its only slightly younger sibling, also perversely had a 'Medium' track that was harder than the 'Hard' track to negotiate. Some cabinets of this game had inflatable air bladders that would push you around the cockpit.


Also played a lot back in the day was Sega Rally Championship (wiki), another game that proved more respected than its successor. This vid brought back a lot of memories. This is the same player as the the first Daytona vid, and like that one I am slightly faster in this game as well, and again not as fast as some. Also interesting that we share the same camera preferences; in Daytona I liked the cam behind the car, but for Sega Rally preferred the bumper cam.

They could be plenty frustrating at times, but I had a lot of fun wasting a lot of time on these things :)
Posted by Off-Black at 7:48 pm No comments: Links to this post

In honour of today being Friday the 13th, and since this being Off-Black and all it would be a shame to miss the opportunity to have that date on a post, here is one of the best pop songs ever produced in New Zealand.

From 1985, I bring you The Mockers, with One Black Friday:

The frontman incidentally was once refreshingly quoted as saying "I see myself as a victory for the mediocre singer". They were one of the more fun and memorable local bands of my childhood and I still listen to them fairly regularly.

According to the lore, the 'One Black Friday' in question and the lyrical content is a reference to a free concert the band performed at that turned into Auckland's 'Queen Street Riot' in December 1984 (more info and accounts here), an event I dimly remember (unlike my memories of the band).
Posted by Off-Black at 8:47 pm 2 comments: Links to this post

This link got a wow from me when I found it a few days ago. This guy has taken various Soviet Second World War photographs from eastern front city locations (Moscow, Leningrad/St Petersburg, Berlin, Vienna, Prague etc), figured out the exact places they were taken, then blended them with freshly shot images from the same perspectives:

The page text is mostly in Russian (I think), but the images speak for themselves. I have seen many ‘then and now’ comparison photographs before, but few as skillfully realised as these (exactly reproducing the perspective and angles of an existing photograph is trickier than it first appears). Very impressive and one of the best removals of abstraction from history I have seen.
Posted by Off-Black at 7:51 pm 1 comment: Links to this post

Its nice to see Charlotte has inherited her parents love of reading, even if she doesn't know how to actually read yet.
Also inherited is her mother's ability to fall asleep on (or under) a book.... 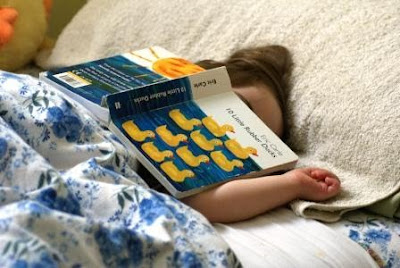 Four years with the same blog template is long enough I reckon. It was starting to feel old, and this new one scratches the itches I had with it. Still got some tinkering here and there planned.

I also figure it was a good time to stop ripping off Goscinny & Uderzo avatar wise, so now you get a real-life picture of me instead.
Posted by Off-Black at 10:24 pm 1 comment: Links to this post 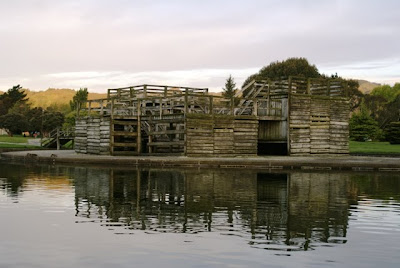 The picture above was taken late last year, after more a few years of neglect, shorn of the tower it once possessed (which older kids would try and convince those younger than them had once included a ladder to get to the very top. Sussing out that the ladder never existed was a kind of rite of passage), and the kayaks and paddle boats it once housed long gone. Here is a picture of it when it was new (including tower), and we were all a lot younger (linky).

In the end, the walls that had withstood and repelled thousands of assaults from all kinds of imagined foes were no match for a humble excavator, which dispatched its target in a day or so: 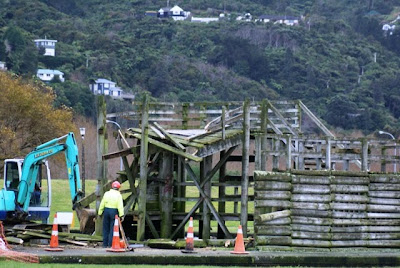 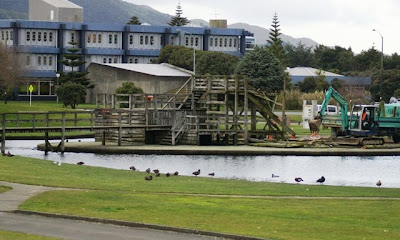 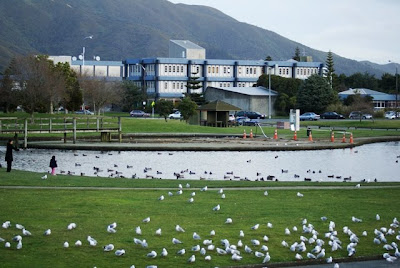 The bridge that was once raced across in anticipation now leads forlornly nowhere. 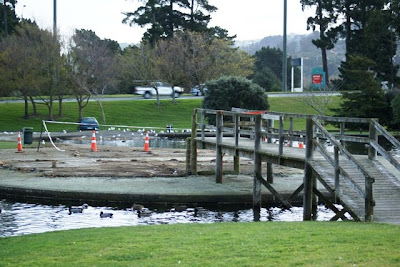 Before it fell though, one more generation got acquainted with the legend, even if she likely won't remember it... 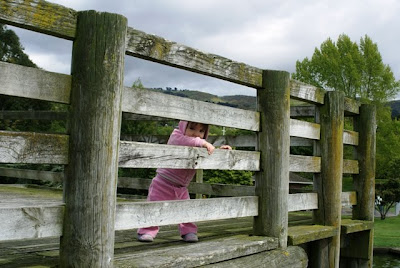 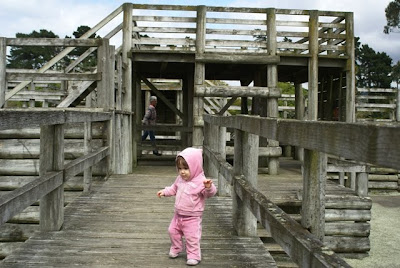 Postscript: It occured to me while writing this, that out of my top three 80's adventure playgrounds, only one now remains, the fort at Eastbourne. The Queen Elizabeth Park concrete and tube bunker fort in Masterton is long gone, and now the Avalon Park Fort has joined it in being history.
Posted by Off-Black at 5:18 pm 1 comment: Links to this post

Today, he amended his list to state the ten reasons why they lost (linky)

Takes class to do that, and I like it.

*Somewhat tragically though, it is evident from the comments that some Kiwi readers just don't get the humour angle....
Posted by Off-Black at 9:57 pm 2 comments: Links to this post

So last night I went to see this band (linky), perform this album (linky).

-Lead singer performing a guitar solo/instrumental while standing on the shoulders of audience members is one of the the more epic rock and roll moments I have seen.

-Knowing the exact setlist beforehand is kind of a novelty, especially when it includes songs you love but have never heard live before.

-I like it when the bass ripples my clothing and rattles my insides.

-Attending gigs on my own has both advantages and drawbacks. One of the advantages of only having my own space and self to protect I discovered was a complete lack of inhibition towards shouldering out munters who thought they had more right to my position than I did (after they left the bar only after their favourite song started playing).

-I think I have a secret sign on my back somewhere that says "Six foot plus tall guy please stand in front of me as soon as the gig starts so I can look at the back of your head instead of the view I was enjoying of the stage". Seems to happen every time.

-Having the soundguy play a slighty obscure album over the PA between the support and main acts, and not only recognising it, but having it in your collection is oddly validating.

-It is nice to see a band perform a now fifteen year old album with the same energy they would have put into it when it was brand new.

-And of course I bought a T-shirt, black, like all good rock and roll T-Shirts should be. 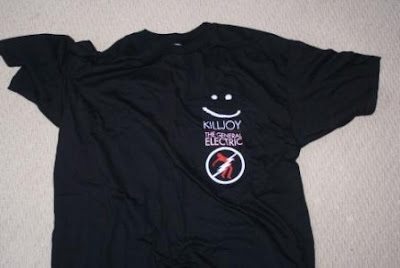 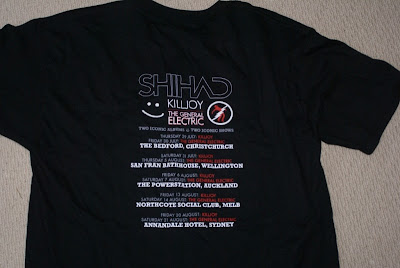 -Going back on Thursday for round two, when they will be playing this album (linky) in its entirety.
Posted by Off-Black at 3:21 pm 1 comment: Links to this post