Right now the mini-mes are winning. It's a delicate balance between trying to encourage my children to enjoy our CD and DVD collection, while ensuring the little monsters cherubs don't destroy them in the process. Charlotte has recently developed a fondness for Bohemian Rhapsody, and the other morning I discovered both sisters dancing away happily to this Soundgarden track, which is good. I like.

There have been casualties though, mostly due to the inherent difficulty factor for little fingers getting discs out of their cases, and associated leverage issues. 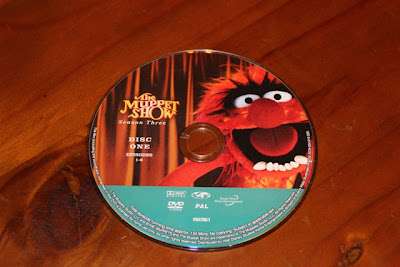 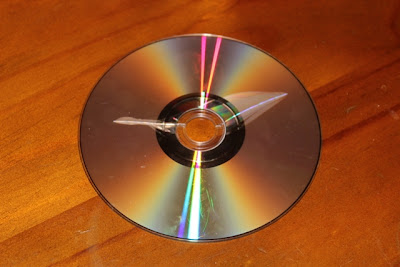 Having introduced Charlotte to the first Star Wars over the summer, (Ep IV, we do not talk about that other trilogy that happened)  we thought she was ready for Episode V, and the reveal of reveals contained therein. We even had a camera ready. Then we went to put the DVD in the player, and found this. Can you see the problem? 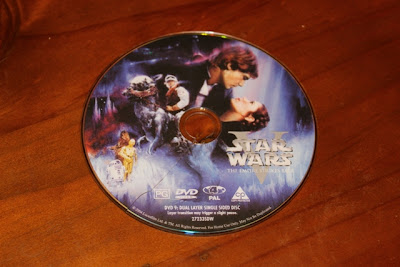 Luke's response to Vader's daddy revelation seemed appropriate at this point. Not that we could WATCH it. 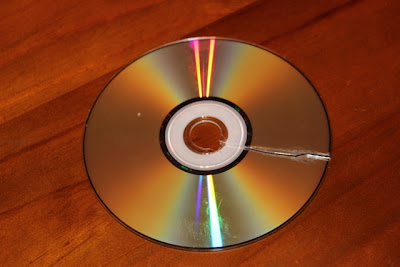 Witness statements as to who jumped the gun (both adults being out of the room at the time) were inconclusive. . .

. . . I'm glad I live in a place where weather forecasters don't have to tell people to get underground if they don't want to risk their lives.

I like extreme weather, but the ultraviolence of tornadoes scares me as much as it fascinates. And we don't even get big tornadoes here, let alone ones that can play poltergeist with a car park in a matter of seconds. 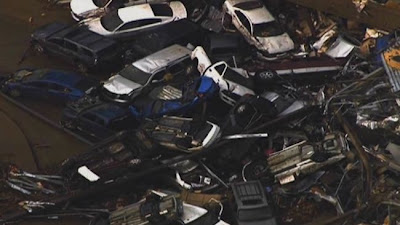 That's the single most unreal image I've seen from Oklahoma today (that I'm going to comment on at least. As a parent of young children I don't have any words for what happened at the elementary school). There was a little one near Wellington a couple of years ago, and you can still see where it went when you drive by. What took place in Moore is surreal by comparison.
Posted by Off-Black at 10:24 pm 2 comments:

Having been involved in a couple of in depth discussions about contrails lately, I thought I'd share a couple of cool ones I've photographed over Wellington. The major air-routes where contrailing occurs run to the east and west of Wellington, so trails directly overhead aren't that common. 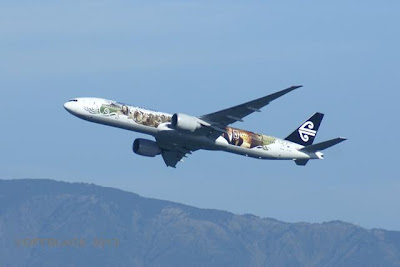 - I noticed this apparition arising from the west. At first I thought it might be the 777 turning up early at altitude, but then realised it was unlikely to be approaching from that direction, and the four engine trails suggested something else. 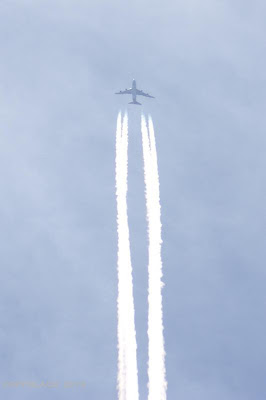 It turned out to be a QANTAS 747-438 a few hours into a 12 hour flight from Sydney to Santiago, and laying a spectacular contrail over NZ's capital in the process. Normally this flight crosses NZ much further south; 747s aren't often seen here. Props to my wife for taking these pics with my camera while leaning out of a car window stuck in traffic: 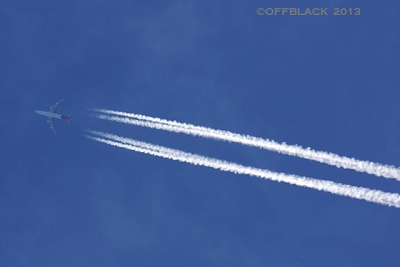 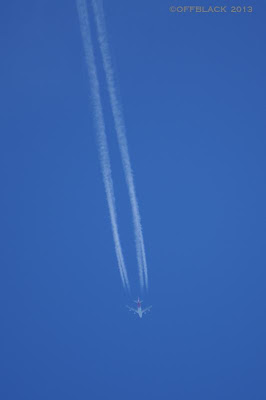 I caught another cool contrailer a couple of years ago. I don't normally bother photographing trails too much, unless they stand out, and this one did. I hadn't seen a trail that fanned out like this one did before, and it turned out to be a USAF C-17 Globemaster III en route from Hawaii to Christchurch to support the Deep Freeze Antarctic operation that is based there. 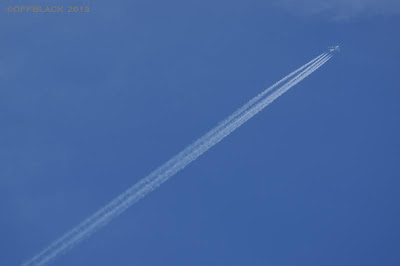 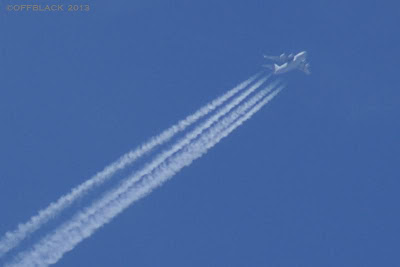 One thing I figured out from this is that you can identify a C-17 from the shape of the contrail alone, which is kind of a neat if mostly useless trick.
Posted by Off-Black at 11:30 pm 2 comments: 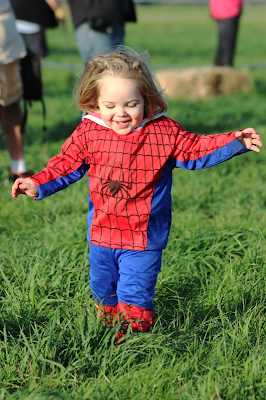 Laying on the cute two days in a row, but my awesome wee Sophie is two today. This is a typical pose for her :) 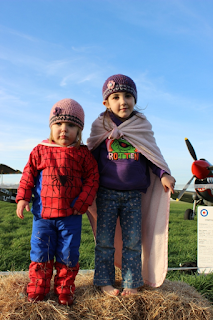 Slightly strange superhero/american gothic portrait of my two favourite wierdos at a little airshow we went to last weekend.