Continuing the age old rivalry between pilots and their navigator/weapons system operators over who has the more important job:

The report gets its numbers a bit mixed up (its 1400 Kph, not Mph), and usual comment ignorance rules apply, but its a cracking shot nonetheless. Also 'Mach Loop' has nothing to do with speed; it is short for 'Machynlleth', a dedicated military low flying area in Wales, and source of many a spectacular photo (linky).
Posted by Off-Black at 11:17 pm No comments:

Fun while it lasted

Our world cup campaign is over, but for once it was worth the hype (unlike a certain other ball sport that dominates this country). The path that we started down back in November (and talked about here) has reached its end.

I can vaguely remember our last visit to the world cup in 1982; this one was much better (linky). We didn't win any games, but in gaining three draws didn't lose any, including drawing against the current cup holder, which is an amazing achievement in context (a realistic pre-cup expectation was to lose all three based on ranking alone). And while we didn't get past the first round, we are in good company; neither did both of the 2006 finalists, among many other good teams whose cup campaigns are also over.

Its been a pretty good ride.
Posted by Off-Black at 1:59 pm 1 comment:

Charlotte has recently developed a tendency to get crazy excited about aircraft (she tried to follow one the other day). Here she is getting enthusiastic about something her father was watching on youtube*, shouting "PLAAAYYNNN!" and clapping her hands. This pleases me :) 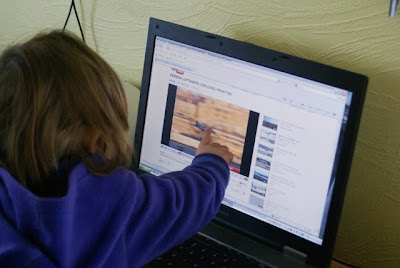 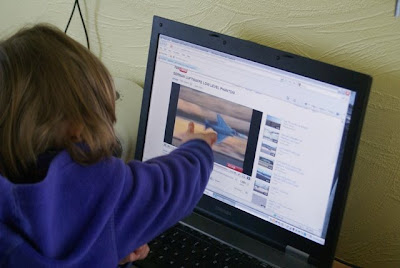 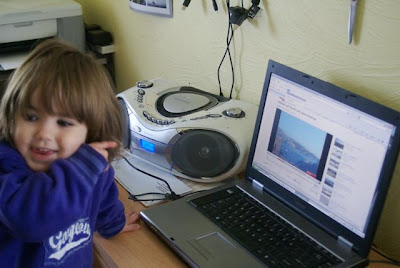 * Today she had a stomach bug and wasn't quite so enthusiastic. Much more cuddly than usual though. She stayed still for a whole hour or so watching music television with me this afternoon.

Here is the video we were watching. German Phantom in one of Valetta's (Malta) harbours, doing things that are illegal in some countries (like the high speed low-level pass straight at the crowd at 00:20). Classic jet with some pretty cool blurry scenery zooming by in the background, low, fast and loud, using afterburner at every opportunity, at sunset. I like it.


And while we're embedding, one of the linked videos from the above was this one, which is another German Phantom. While parts of the above would be frowned upon in some locales, parts of this one are just freaking batshit insane. This is proper no margin for safety or error stuff. I linked to it a few years ago but here it is again just because:

One of my favourite youtube vids, because it is awesome, funny, and terrifying all at the same time (and a great soundtrack :p). It's not often you see people decide they need to get out of the way of an oncoming jet that is still airborne...
Posted by Off-Black at 10:25 pm No comments:

I have enjoyed following this for the last few days:

Stuff technology blogger lists 7 videos supporting the Moon landing hoax conspiracy and rightly gets flamed for it in the comments section (linky).

It's amusing for its own sake (most epicly when the author of the first video debunks his own work as an intentional hoax of a hoax), but also reassuring to see so many commenters go into bat against the insult to learning and reason that the hoax theory is.
Posted by Off-Black at 12:22 pm No comments:

Listening to: Scream in Blue - Midnight Oil Live (1992). One of the best live albums you've probably never heard of. Collected from various gigs across the bands career to that point and an excellent introduction to the body of work. Also notable for not having any mistakes corrected in post production, leaving the occasional bum note and pops and squeaks of dropped mikes to add to the feel.

I headed out to the airport the other day to practice a couple of things with my camera. It was a wet cold southerly, good for generating some nice condensation streamer shots: 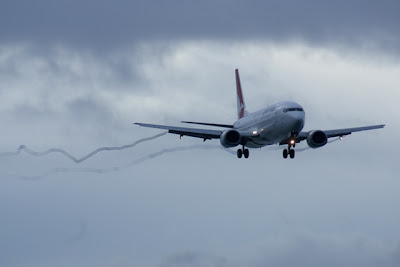 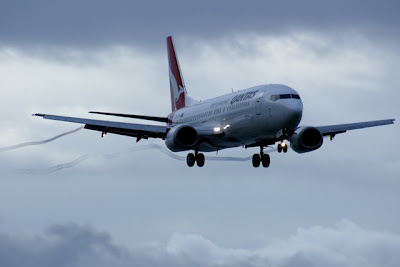 Meanwhile, if you add a bit more energy and humidity, you'll get vapour ectoplasm that looks like this (link). Some of the cooler shots of their kind I have seen.
Posted by Off-Black at 9:32 pm No comments:

29 years after the first launch, the era of the Space Shuttle is drawing to a close, with two launches remaining before the system is retired.

It is still a marvel able to impress though. I came across this video recently showing just a tiny part of what each launch involves:

Time lapse of Shuttle being prepared for launch (link)

For all our modern faults, its pretty wondrous to me that we live in an age where something like this can be taken for granted. The bit where the gantry picks the shuttle up, rotates it and moves it up, down and around blows my mind. I know that building is big (it was built to assemble the Saturn V rockets for the Apollo moon missions), but to see it illustrated like this shows you just how big.
Posted by Off-Black at 8:38 pm 1 comment:

Lucky we got such a good space! 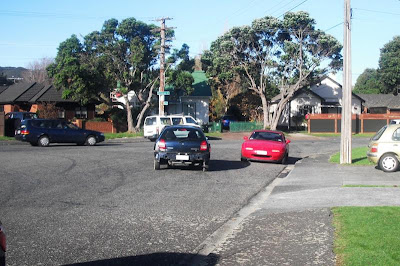 The blue car in the middle of the shot outside my Mother-in-Law's house is parked. Engine off and no-one aboard. The neighbours just dribbled up, hopped out and ambled inside. One of the best bits of car-parking I have ever seen :) Apparently they do this fairly often (probably explains why the rear bumper is missing).

The previous post was number 499, which makes this 500 since I started this a little over four years ago (prompt slow hand clap for the awesum maths skillz there). I was trying to engineer the 500th post to coincide with the fourth blogiversary that occurred on May 21st, but discovered a bunch of unpublished drafts (that were all eventually published in some form) lurking in the edit folder and bumping the post numbers up artificially. Once they were excised (or exorcised) the 500 marker got put back a bit.

Since a few of the '100 posts resemble this one, I thought it would be better to sample link the vanilla '99 posts from the last four years, starting at the the very beginning for context.

If you have been reading from the beginning, cheers for being patient and loyal. If you're newish, cheers for taking a look and coming back.

Had a go at photographing star trails the other night. 100 ASA, F5, about 60 minutes. Got some nice trails and a bit of blur from the Milky Way itself (top centre right). 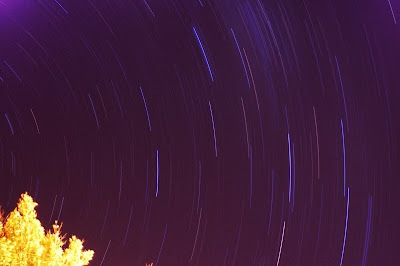 Couple of things to do next time: Aim for the south celestial pole, and go somewhere a bit darker than my backyard; there is a lot of noise in the image due to light pollution.
Posted by Off-Black at 11:56 pm No comments:

How the hell is it June already? I wasn't consulted. I just know it is getting harder to find my sunnies when I need them, since they aren't being worn every day (or week as it happens round here lately). Wasn't it summer not that long ago?
Posted by Off-Black at 11:09 pm 3 comments: