The corporate sponsorship requirements of the upcoming Rugby World Cup are making for some interesting observations at the moment. To protect profits, any sponsor or business not involved in the tournament funds is being ruthlessy shoved out of the way, sometimes gently, but other times absurdly, like making charity ambulances cover up the sponsors that keep them operating.

Most noticably so far in Wellington, with it's naming rights sponsor not being involved in the RWC, Westpac Stadium has lost part of it's external signage: 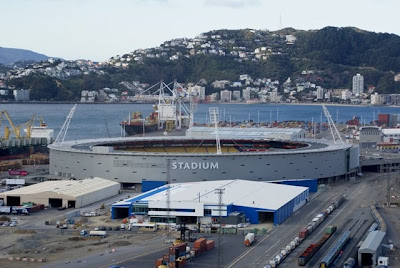 This fits with the 'clean' requirement, but does make the stadium look like someone has been busy with a giant label maker lest anyone was wondering what the big round thing was (although it now reflects what most locals call the thing anyway). It still lights up at night, making the incongruity even more special.

Another sponsorship curiosity has been highlighted by this TV ad:

I quite like it. It is sweet and nostalgic, and neatly sums up the disappointment for fans resulting from the arguably best team in the game not winning its premier tournament for a generation. Steinlager have sponsored the All Blacks since the mid 80's, and are re-introducing the old style white cans for the duration of tournament, which I also like.

The first thing though is, if security is halfway competent, there is no way our loyal fan is going to get his talisman through the gate at the game venue. The second thing of note is that while Steinlager might sponsor the AB's, the official beer of the tournament is Heineken, so the latter will be the only beer available at any game :).

i wish the powers that be had just put 'the' in front of the word stadium. it is what we all call it after all. and it would make more sense. though i do like the giant label maker analogy.

I read today it has been renamed "Wellington Regional Stadium" for the event. How quaintly bland.