Maybe "Burning Down The House" would have been a better song to nick a post title from: 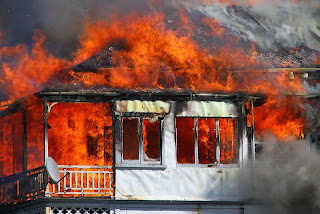 The old house in Allenby Terrace has burned again, this time probably terminally. The fact of a house fire isn't particularly significant, but this house in particular seems to have been some kind of hub amongst my circle of friends. Fi and I know at least half a dozen or more people who have flatted within its walls in the last decade or so, not always in the same flat, and not always known to each other even. I never lived there but remember it well from many visits and the occasional crash.

The building was over a hundred years old; for one flat the toilet and bathroom was outside across the yard in the old servants quarters. Originally one elegant house, by the time we got to know it there were separate flats across it's three floors, and the building was utterly dilapidated in true low-rent student accommodation tradition. I recall a particularly memorable pyjama party in one flat in mid 1999. At the end of the year we gathered there to use it as a launch pad for heading into town to see in the new millennium.

In the mid-2000's I helped repaint a room in another part of the building; there were pieces of cardboard blocking holes in the floor and ceiling. A fire in 2009 (link) saw the place condemned, and a friend of mine living in the redecorated room below the fire forced to relocate (which I blogged about here ).

I have fond memories of this place, and even though it's demise was inevitable, it is still a bit sad to see it go. That said, and the danger to neighbouring properties notwithstanding, maybe a Viking Funeral was a fitting end for a multi-storeyed and multi-storied abode.
Posted by Off-Black at 10:46 pm