This is our tent and campsite in Taupo on Monday evening last week. Pretty normal looking. 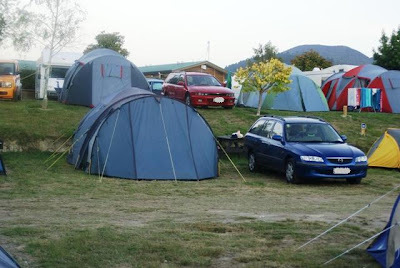 But looking at the neighbours (you can just see our blue car poking out from behind the 4x4), reveals an unusual concentration of cars and tents spread across three sites: 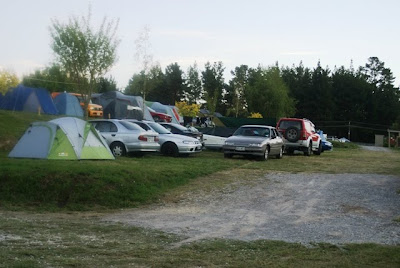 Oh, and a drag racer. 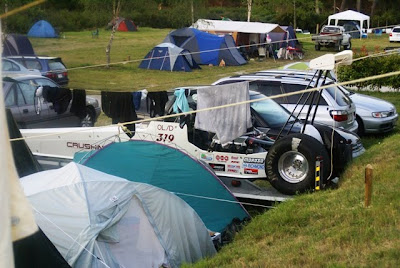 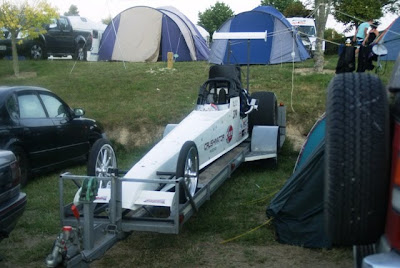 Turns out a version of the West Family was encamped next door, in the form of a 10 strong family based racing team. The young'uns amongst them partied like it was 1999 for the two nights they were there next to us (we lent them a tent post to help prop up their communal awning. In return I was offered a beer. Or a bourbon and cola), which is great if you are in the mood, and I get their enthusiasm having done the same thing (if not quite so noisily) at their age. If you aren't in the mood though, tents are rubbish sound insulators, especially when the party is only a few meters away, and you have a two-year old who you not only want to keep asleep, but will get up and then wake you up at 7am no matter what.
Things culminated around midnight when one of them tripped over the recycling bin full of empty bottles and cans, and then fell on to his own tent, which was funny as hell apparently, but caused the dad of the party (and presumably the head man in charge) to get up out of his tent and do some law laying down of the late night noise in public and consideration for other campers kind, which saved us the trouble of doing the same thing. They left the next day and we got three further nights of peace and quiet after dark. 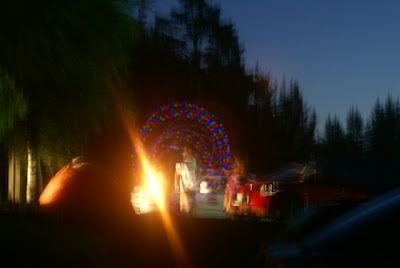 At the other end of our row in contrast we had the F__king Europeans (french and german going by the accents. They spoke in english to each other). After putting on a show with the light poi at dusk, they put on a show of another kind in the not quite dark, by getting all frisky on it and not quite discreetly shagging on the bonnet of one of their cars (to the accompaniment of some pretty average dance music from one of the car stereos) technically in the shadows, but plainly visible to any passerby (and they were next to an access way, so there were many of those) who glanced their way for more than half a second. Their activities were described in great detail by the aforementioned young'uns next door, one or two of whom made not so subtle reconnaissances to check that they really were seeing in silhouette what they thought they were seeing.
They left before dawn, presumably wanting to leave the site with a bang (sorry, couldn't resist the pun). Wednesday the 5th saw the end of the New Years public holidays, so the camp quitened down a bit after all that early excitement as people went home to go back to work.
Posted by Off-Black at 11:21 pm