The Fanboys vs George Lucas. 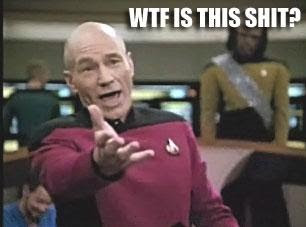 Jean-Luc didn't like the opening scenes of 'The Phantom Menace' either...

The at times wonderful, at times strange, and at times completely dysfunctional relationship between the legacy of Star Wars, it's fans, and it's creator was one of the main themes of a documentary I saw on the weekend, "The People vs George Lucas":

It was fun. The documentary is squarely aimed at fans rather than casual viewers not quite as intimately knowledgeable of the franchise, and uses the fan relationship to examine in a wider sense just what Star Wars is now, and how many fans feel miffed about what happened to their favourite franchise and George Lucas himself (although in the documentary he only appears in clips from archival interviews, contributing to a noticeable lack of input or commentary from anyone involved in the current Lucasfilm hierarchy).

For many if not most fans the six film Star Wars saga can generally be seen one of two ways; as a complete epic work, or as two quite different trilogies, separate in time, space and vision. There is the 'original' (although just what constitutes 'original', and how it has seemingly been redefined is another key theme of the doco) 1976-1983 trilogy, and then there is, umm, the other one, of pre-sequels that some love, some hate, and many love to hate.

My interaction as a Star Wars fan centres around the classic first three movies that have been influencing pop culture ever since they were released three decades ago. I am aware of the other stuff in the canon, read a few of the novels, know a lot of the lore, but haven't really kept up with the non-movie based stuff that is out there.

I feel a bit privileged to be a part of the generation that saw the original originals on that first cinematic release. I was born in 1976, so missed the first one, but definitely saw 'The Empire Strikes Back' in 1980 or so, and remember seeing 'Return of the Jedi' twice in 1983 (at the St James when it was a cinema, and at a long defunct cinema in Naenae). I was perfectly placed to catch what was left of the merchandising wave as it ebbed into the mid 80's, and perfectly placed again to participate in the mid 90's revival of interest in the franchise, now armed with some spending power to grab some of the things I would have lusted after but couldn't have a decade before. Like T-shirts for one... 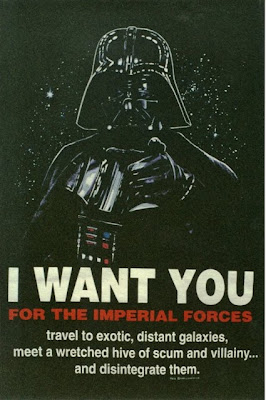 Like a lot of others, the universe realised on screen wasn't one I merely wanted to watch, it was one I wanted to live in. I particularly wanted a speederbike I could ride to school. I also perfected the art of lightsabreing Agapanthis stalks with a bamboo stick, to my mum's horror. I instantly, and forevermore preferred it to the Star Trek alternative in its various incarnations, which always looked just a little too clean and perfect. Star Wars on the other hand looked like it was filmed on location in a grungy, scruffy, lived in and imperfect series of worlds and vehicles.

When the films were re-released in the intended-at-the-time-to-be definitive Special Editions I was so happy to see them on the big screen again I overlooked the worst of the tinkerings, and enjoyed the best. It was a good time to be a fan. 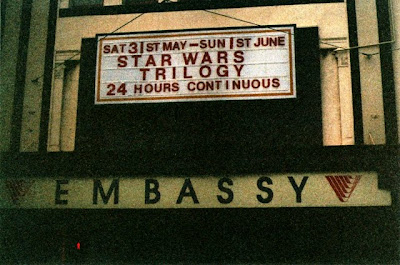 As time passed though, a few of the 'improvements' quickly became a bit less appreciated, and a few became downright cringeworthy. In this imperfect atmosphere the new films were eagerly awaited (I remember downloading the 'Phantom Menace' trailer on a painfully slow, overloaded dial-up connection, and being very excited to finally see it after an hour or so of hoping the connection didn't crash), with the fervent hope and expectation that they be great, only to be slightly underwhelmed when they arrived.

In hindsight living up to their predecessors was an impossible task, but the prequels wound up feeling a bit adequate and a bit perfunctory, not terrible but missing the opportunity to be awesome (and with not that many tweaks, they could have been awesome). Some great moments and scenes, great technical achievements, some great action sequences (and for all his charges, I think he is still a great and under-rated action director), but little heart, thrill, or immersion, terrible dialogue, canon-derailing plot devices, character and plot miscues, good actors looking like amateurs, and overall feeling only special because they were Star Wars movies. A lot of people were left wondering where it all went wrong. And to an extent I think, missing the point.

Putting aside the arguments over creative direction, actual direction-direction of the new films and the continued tinkering with, and mysterious unavailability on a licenced modern format of the first-release cuts of the original films (and on the case presented I am inclined to think Lucas is probably guilty of the various things the documentary makers charge here), we fell in love with the originals as children. Relating to the re-imagined original trilogy, and the new films in the same way was always going to be impossible as adults. And here's the thing; if I was seven years old again, I would probably love the prequels just as much as I do their older siblings, which aren't without their flaws either if I am honest.

Lucas says the prequels were aimed at kids, and thus a new generation of fans (and/or merchandising opportunities if you are cynical), and while some could see this as a backpedalling cop-out, the appeal of the newer films to a younger audience is undeniable. I hate Jar-Jar Binks as much as any other fan, and I cringe these days whenever the similarly roled Ewoks from 'Return of the Jedi' are on screen. In 1983 though, I loved the Ewoks. Somewhat tragically/fortunately though I never got around to seeing 'Caravan of Courage' (as an aside the Ewok battle in ROTJ reminds me of just how casually ultraviolent-in-a-sanitised-way the Star Wars universe really is, a theme continued in the non-movie canon and lore as well). I wonder if in ten or twenty years time the prequels will be critically reassessed and held in slightly higher regard than they are now. I haven't tried it, but according to some they apparently they work better if watched in an epic Ep I through VI back to back session.

I can see the point of view of some that the revisions and additions have despoiled their relationship with the movies (including the absurd and slightly offensive 'George Lucas raped my childhood' song seen in the trailer), but can't agree with it for myself. Whatever the films represent now doesn't affect my memories of letting my enthralled imagination run wild with George Lucas' ideas in the slightest, which one interviewee in the movie rightly points out. The fun I had then, and still have with it is untouchable.

This ramble has turned out to be more about my relationship with the movies than the documentary, but that just goes to show that even after all that has gone on, there is still some magic to be had. The documentary while not without it's own flaws, works well at reminding the viewer of this, and in my mind while ostensibly hostile to Lucas, goes a long way towards at least illustrating his position if not partially exonerating him (even if perhaps unintentionally). That it even exists is a reminder of just how powerful, influential and inspirational cinema, and this franchise in particular can be. There might be a lot of rabid passion and hatred from the fans out there, but it is rooted in a kind of love.

And for the record, Han will always shoot first.

PS: Fi, Kate and Rich saw the documentary with me, and the latter has composed a much more considered and insightful review post than mine here.

I love the pic of Jean Luc Picard! A very Trek kind of moment - though I think Han struck that pose at some stage too.

I will admit that I consider myself more a Trekkie myself. It always did seem a lot more grown up, though in a very clean way. So, while I must concede that Picard would never fire first, when he focuses his death stare upon someone, it is definitely shoot to kill.