Coincidence can be a strange thing sometimes. On New Years Eve just past I met someone from a place I had never heard of before, the town of Gympie in Australia. A couple of weeks later Gympie was making headlines during the Queensland floods.

Similarly, a few years ago we took on a boarder in the form of a Japanese student teacher doing an exchange at the school Fi teaches at. When Moto heard of the earthquake in Christchurch a few weeks ago, he was quickly messaging us on facebook to see if we were okay. Now it is our turn to message him the other way. Unfortunately his facebook location is Iwaki in the Fukushima prefecture, right in the middle of a disaster that is almost defying comprehension from afar. He hasn't replied yet, and we and the others who have left messages for him are all hoping that he merely has more important things to do than check his social media at the moment.

I thought the Christchurch earthquake was bad, but has happened and is happening in Japan is something else. I don't mind admitting that the live images of one of the tsunami rolling in and overwhelming everything in it's path on Friday night was one of the scariest things I have ever seen on TV. I mean, just ponder for a minute the sort of force that can create a scene like this: 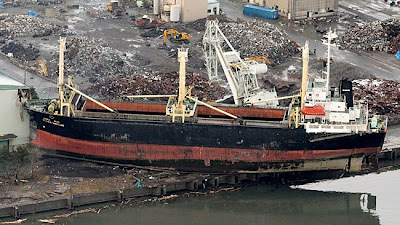 It's terrible. I hope your Japanese friend is ok, and am glad where you live wasn't too affected by the New Zealand earthquake.

Thanks Maureen. We just found out today he is okay and at a shelter with his family, although his house is destroyed apparently.
I think I mentioned we felt the Christchurch earthquake here, but at 200 or so miles away it didn't affect us directly. What I have found interesting about both earthquakes is the general vindication of strict local building codes ensuring survival of the occupants. Most buildings, even if badly damaged stood long enough to let people get out. It was another wake up call for my city though, since something similar will certainly happen here one day. There are at least two or three major faults running through the region (including one on the other side of the ridge from my house :)), with many other minor ones. The last time one of the major faults let go in a big way was in 1855, and that resulted in an estimated 8.1 mag earthquake that literally rearranged the landscape of Wellington Harbour and the Hutt Valley where I live. One benefit of all this is that we now have the proper basis of a survival kit at our house to keep us going for a few days or more if we are isolated and cut off from utilities, which living on a hill next to the main Wellington fault is practically a given if it shifts :) The house is on solid peneplain remnant bedrock so I am not too worried about it, but the surrounding roads I'm expecting to be messed up in the unlikely event.