Last week was the first anniversary of me finding out my first girlfriend had died. A year since the phone call saying the death notice was in the paper, a year since the funeral. It was the biggest reason I didn't blog much last year. I'd never lost anyone that close to me before and it really knocked me back for a while. I was pondering just what to blog about this, or even to blog about it at all. It's a confusing thing. She was the centre of my world once, but not for that long and it was half a lifetime ago, so why so bothered? What level of grief is appropriate? Is there even such a thing? But then you remember that even if you didn't see them often, you still cared about this person. 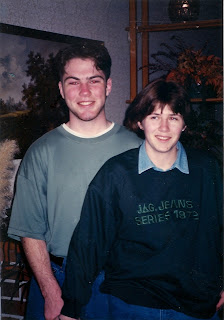 This is me and Juliette about a million nineteen years ago. We dated for 9 months between summers in 1994, when we were both 17 turning 18. I was a first year, and she was in her last year of high school. I wasn't her first, and very much a naif - she taught me a lot about how to be in a relationship. Somebody had to, since I was clueless on the topic. Both being stroppy teenagers, we partied well (I've been told we appeared virtually inseperable at times), and occasionally fought well too. Lots of good times, a few forgettable ones, and a few that will forever stay between me and her to protect the innocent guilty.

We didn't end well, and were on each others shitlists for a while, but stayed in the same circles and eventually realised that we actually could still be friends. After a few years we were pretty much reconciled (and ironically being a bit more mature much better suited to being in an actual relationship, had the prior history not been there). Eventually though as the 90's drew to a close we went separate ways, and lost touch a little bit. We caught up on the odd occasion, but after around 2003 I lost touch with her completely until a couple of years ago. The last time I saw her was about a year before she died (at a barbecue notable for the attendance of not only all of my exes but my wife. Since they are all nice people, my world didn't implode). My wife being the wonderful soul she is, left us alone to fill in the gaps. The deal fate gave her in the form of bipolar disorder was a particularly shitty one, and the intervening years unkind. It saddens me still to think of all the talents she had (she was good at a lot of things), and potential and happiness she wasn't able to realise. After a lot of struggle though, things seemed to be looking up for her. We parted well that night, at peace with each other, and made plans to try and see each other a bit more often, but busy lives got in the way and suddenly there could be no more catchups ever.


It occurred to me that when an ex dies, and you are still living in the same place as you were when you were dating, it's a bit like breaking up with them all over again. You look around and remember, this is where we did this, that is where we did that, like no time has passed at all. I thought about what I could write about, what stories to relate, but then realised that the things that most reminded me of her were songs. Music was one of the things we bonded over and nearly two decades later the associations are still strong, so that is the eulogy I'm choosing. They might not be particularly great or funny memories, but they're mine.

The song she hated because she thought love should be a 24/7 thing : Friday I’m In Love

The song that reminds me a lot of that time, of being old enough to date, but still young enough to be restricted, particularly when it comes to having to catch buses to get around if the parents you are still living with won't lend you a car: Dancing in the moonlight

The song that we discussed a lot, and just seemed to capture a lot of moments, including a discussion at a party with somebody or other's cousin, who was the lead singer with a deep voice of an improbably named band called Thrusthusband (a name they wrote in Greek), and just how the deep voice in the song worked: Mmm Mmm Mmm Mmm

The song she requested for me one night when we were playing dedication tag on Kix FM: Tunnel of Love. They didn't have it, so played Imagine instead, which isn't one of my faves (to put it politely). I still have the tape of the announcer's explanation somewhere.
The song I got played for her: Nights In White Satin. She loved The Moody Blues.

The song that at 2:20 reminds me of a single perfect moment at the 1994 Sacred Heart school ball : Hey Now (Girls Just Want To Have Fun)

The song she got bouncing up and down excited about in the car one Friday night on the way to her hockey game because she picked the “very late” lyric before it came up on her first listen: Round Here. It’s one of my favourite memories of her. I still remember the exact stretch of road we were on.

The two songs we bought a matching pair of cassingles together: Mr Jones and Streets Of Philadelphia.

The song from that year's Pink Floyd album, that we sat with nothing to say just staring out the window from her parents lounge one rainy day: Marooned. She gave me a Pink Floyd T-Shirt for my birthday, which still fits.

The song that always reminds me of a particular Friday night party in March 1994 and going to watch her play high school cricket the next day, and whose “time to say goodbye now” lyric particularly resonated after her death: Tear in your hand.

The album she introduced me to, via an arabian pirate copy she got when her family lived in Syria: Wish You Were Here

The song I first heard on a Vic Uni pub crawl we both went on, on a jukebox in the old St George Hotel bar, despite neither of us being Vic students, or of a legal age to drink: Disarm. The opening to this song from the same album is beautiful and always reminds me of those times. That album was everywhere then.

The song from an album that was at every party we went to then, and would remind me of her in the period after we split: Sitting Inside My Head.

The song I played at her the night we broke up. Yeah, subtle: Crazy Love Part II.

Two songs that for whatever reasons, helped me deal with things last year: Diamond Jigsaw and Scribble. When driving alone in the car at night for a couple of weeks I would just play them over and over.

We both loved Supertramp. I remember her favourite song of theirs was School, but they carried her coffin out of the church to Take The Long Way Home. It's a favourite of mine but I haven't felt the urge to listen to it since.
Posted by Off-Black at 11:28 pm

Very touching blog, Juliette will be missed and your Blog is the proves that.