Finally getting around to posting some pics of the show itself. Rather than deluge a giant pic post, I thought I would try and go for theme or type posts. Since it opened the show, it seems only fair to start with the Hawker Hunter FR.74B. 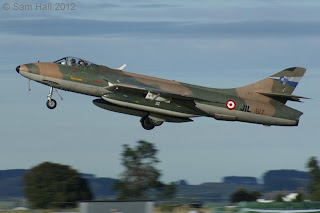 This isn't an RNZAF jet, but a civilian owned and operated jet warbird, which first started flying in NZ in 2000 before being grounded for cost reasons mid-decade (it's a high performance jet fighter, and thus not exactly cheap to run). It was reactivated for this summer's display season, and it is great to see it flying again.

The Hunter is a second generation jet fighter developed in the 1950's by the British, one of the best looking jet fighters ever built, and one of my favourite types. The RNZAF never operated Hunters, but New Zealanders did fly them on exchange with the RAF. This particular one was built in 1957 and had an RAF career before being refurbished and having a second career with the Republic of Singapore Air Force, whose colours it wears now. The Singaporeans retired it in 1992, and it came here a few years later.

It might be old, but it's no slouch. It's plenty fast enough to generate it's own vapour cloud on a high speed pass (500+ knots in this shot; it is in fact the fastest aircraft currently flying in NZ). If only the sun was shining on this pass it would have shown up the vapour better: 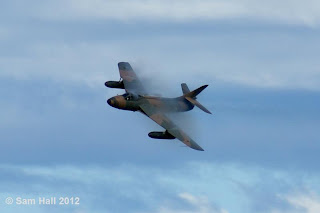 One of the things I've learned about airshow photography is anticipation is key. Knowing where the aircraft is going to be and what it might do is really handy. With that in mind I remembered seeing a picture of a couple of Swiss Hunters generating good vapour on a fast pass in a magazine a little while ago, so was hoping the morning air might be good to see the same here. I got lucky: 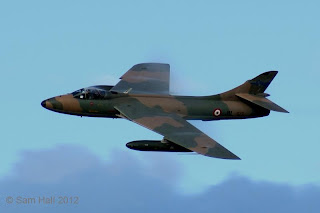 Again would have been awesome if the light was a bit better, but them's the breaks. The streaks over the wings are cool, but I particularly like the little bit of ectoplasm sitting right above the pilot :).

Like many high-performance aircraft of its era it uses a braking parachute to slow down after landing. 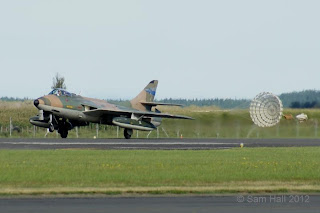 I used to love seeing this jet at shows in the early 2000's, and hopefully we'll see it around for a few more seasons yet. It's fast, noisy, graceful and full of character.