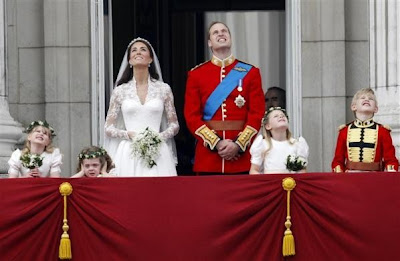 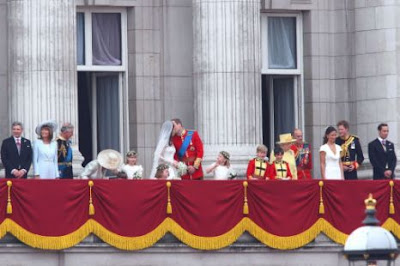 So after listening to the Breakers win the ANBL for the first time (and their coach drop the F-bomb in a live to two countries interview post match. Hilarious), out of historical curiosity I flicked on the TV watch the live broadcast of the Royal Wedding. TVNZ's feed was the first I came to, and since they looked to have ditched their own flown in at taxpayer expense hosting talent in favour of the actually-know-what-they-are-talking-about sounding people on the local feed, I stuck with them.

About 2145 (times are NZ local, this is 1045 in the UK):
Almost perfect time to start watching, just as the soon to be princess leaves Goring Hotel to go to Westminster Abbey. This signifies that shit's about to get real yo, and I have missed the "oooh, famous people" talking head blather that will have made up the coverage for the previous couple of hours.

About 2155
Timing not looking so good as the commentators start wildly squeeeing and verbally waving their elbows (actually, probably not-verbally as well) about the dress as the bride walks into Westminster Abbey. Find something else to do away from the TV while they take deep breaths and calm down. It's a dress, white with veil, not showing underwear, or too much cleavage so probably suitable for the occasion. The massive train provokes a "never mind the bride, who is the hottie walking behind her?" question. Turns out it is the bride's younger sister. The bride herself is a class act.

About 2200
The bridal party proceeds up the aisle to "Guide me thou o Great Redeemer" (I'm not even going to try and pronounce it in it's native Welsh). Since I had this at my own wedding, I conclude from the Royal use that I must have exceptional taste. Also note the trees that have been placed inside Westminster Abbey, and the general abundance of greenery amid the wood and stonework. Slightly trippy and quite cool.

The actual wedding starts. Stripping away the ritual and surroundings and the couple look seriously into each other, which is always a good thing at this kind of occasion. Also note that not only does Prince Harry look like he is having a great time, he is also seems quite a big guy in a buff sense, giant uniform epaulettes not withstanding. Figuring out exactly which uniform any given male member of the royal family is wearing is a fun exercise to pass the time.

2220 ish.
The deed is done. Now the speeches start. Boring and platitudinous. Even the Married Couple look like they have itchy feet. Leave the room.

2230 ish.
More speeches/readings. The bride's brother has a very crooked tie, which I would rue if it were me given the approximately bajillion people watching. Go back to what I was doing elsewhere.

2245.
Yup, still talking or hymning. The feed keeps cutting to shots of the congregation, prominent members of which I am probably supposed to recognise. Elton John turns up repeatedly in this segment. Also note that while "God save the Queen" is sung the Queen herself doesn't sing, which is entirely logical when you think about it, and also carries the bonus of if you happen to be Queen of the United Kingdom, you are permanently excused from ever having to sing your national anthem in public.

2315ish.
Finally they get to walk down the aisle and leave the Abbey. Crowd goes wild. The bride and groom set off in their carriage to Buckingham Palace while thousands line the route and squee. Prince Phillip is looking old these days, and initially looks to have trouble getting into his own carriage. The Queen as ever is totally dignified. A lot of drive-by saluting is done by Prince William, accompanied by hearing a band start playing 'God Save the Queen' on what seems like every corner. Wonder if they stop playing once the carriage has passed.

2320ish.
Idly wonder how many of the weapons seen on the procession route are loaded. Have doubts about the rifles held by the honour guards, no doubts about the sub-machine guns being held by prominently placed police. The deliberately obvious security causes more idle wondering about how much non obvious security is around. Like that horses are still fashionable for Royal occasions.

2330ish.
The procession starts disembarking at Buckingham Palace. Prince William is greeted by a RAF Air Vice Marshal, some light-years in rank above William's current day-job rank of Flight Lieutenant. Wonder in this context just who calls who 'Sir'. The Queen has a smile and a nice word for her palace greeters, while Prince Andrew ignores everyone and practically runs inside. Princess Beatrice appears to be wearing an octopus sculpture on her head.

2335.
The Royals have disappeared into the bowels of the palace, so the TV people start interviewing the crowd. Some remind me of the great British talent of being dryly hilarious without even trying, but mostly interviewing the crowd (while impressively sized at hundreds of thousands) is about as interesting as expected, somewhere above watching grass grow, but below watching paint dry.

Nothing remotely interesting is supposed to happen in the next forty minutes or so, so I find other things to do.

0005.
Return to find lots of anticipation about the upcoming balcony appearance by the Royal Family and accompanying fly-past by the Royal Air Force. The balcony windows having net curtains becomes a source of obsession for the commentators as they zoom the cameras in to try and see through them.

0025.
Party emerges onto balcony, couple snogs. Crowd goes wild. The network providing the feed has managed to shoe-horn a reporter into the cockpit of the Battle of Britain Memorial Flight Lancaster for a live commentary on the flypast from one of the aircraft in it. The fish-eye lens distorts the view so much at first I don't even recognise it as a Lancaster. Another camera though in one of the gun turrets provides a great shot of a Hurricane in close formation, nicely framed by a pair of .303 gun muzzles. The reporter doesn't appear to be able to hear the studio, so the producer disappointingly drops his feed.

0030ish.
The Hurricane-Lancaster-Spitfire formation flies down The Mall and over the Palace, the combined 72 cylinders of 5 Rolls Royce Merlin and 1 Griffon engines combining for a bit of aural goodness that is definitely a sound rather than a noise. The non historic formation of 2 Tornadoes and 2 Typhoons doesn't sound anything like as good. That's it as far as the flypast goes. A bit underwhelming until I remember that the RAF is busy elsewhere with a couple of wars at the moment. Still surprised that the Red Arrows didn't feature though.

Flypast done, the couple snog again and everyone goes back inside. TVNZ ditching the local commentators to re-introduce the Walrus and Petri-Dish is conclusive evidence there is nothing more to see here so I go to bed. Awake in the morning to find the photoshoppers have already been busy: 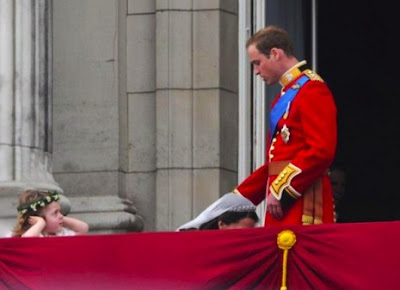 Addendum: This occured later on in the day. Also something I did at my wedding (the taking my new bride for a spin in a convertible bit, not the driving through the palace gates bit), albeit without the accompanying Range Rover full of bodyguards.

Great summary! You would be proud of your wife who knew what type of plane(s) were in the flyover :)

You need to officially hnad in your man card right now. Really, a running diary of the royal wedding?

Don't have a man-card to hand in Jon, since I am secure enough in my masculinity not to need one. Real men have no use for them.