Listening to: My MP3 player on random, having finally gotten around to hooking it up to the stereo. Right now it is playing 'Stay' by Aerial, followed by 'Under my thumb' by the Rolling Stones. I really like the low key bass anti-solo on the latter.

Picked up both of these today for cheaps. 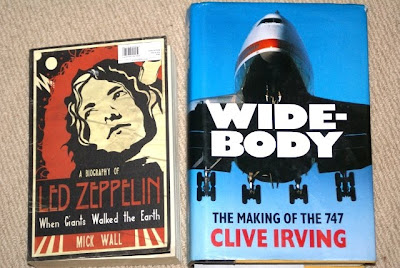 Both biographies of sorts, although I am about the only person I know who would want to read both. I have read the 747 one before, a long time ago (it was published in the 90's) and remember it well, one of the key revelations being that if no-on had bought the 747, there would now not be a Boeing company. It makes a nice companion to a similarly aged informal history of the company I also have. There are some interesting tales buried within.

The Zeppelin book I haven't read, but have heard good things about and is only a couple of years old. The older I get the more I appreciate Led Zeppelin. I started out with a greatest hits collection ('Remasters') about ten years ago, and now have most of the albums. Hopefully the book will be a good companion and source of context for them. Note also the image is of the back cover. Clever publishers made the book flippable, with the other side having a suitably epic image in the same style of Jimmy Page in full noise guitar-golden-god mode.