The goat that ate Wellington

This time last month, I looked out my office window, saw the wind turn to the south and posted this on facebook in anticipation of the weather that had been forecast:


And then for about 24 hours nothing happened. But while it was calm for now, out in Cook Strait a stormy goat was arising. A very ANGRY goat. 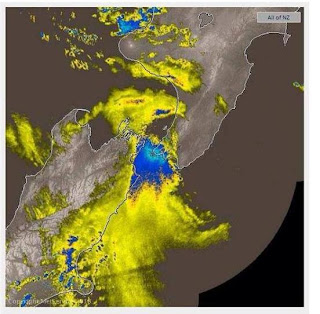 Screenshot from the metservice rain radar on the night of 20th June.

Besides the forecast, the big hint that something out of the ordinary was up was an email to my worksite from the electricity distribution company saying that not only were they anticipating the possibility of power cuts that night, they were expecting them. Just before heading home after a calm day, I looked out the window and noticed the clouds I could see were suddenly moving a lot quicker. When I walked out to the car the wind was picking up bluster, and by dinnertime an hour later it was violent. My place is slightly sheltered from the predominant northwest and southerly gales, but this one was out of the southwest, and shaking the house with every gust, gusts I could occasionally hear roaring up the hill toward us. And then it just built and built.

Mid evening I took a screenshot of current conditions from metservice, which showed the wind had shifted to the south and was now averaging just over one hundred kilometres per hour. I've never seen it like this, equivalent to a category 1 hurricane (and if that is a weak hurricane, I'm glad I don't live somewhere where strong ones happen). Up on Mount Kaukau above the city there was a gust of more than two hundred. 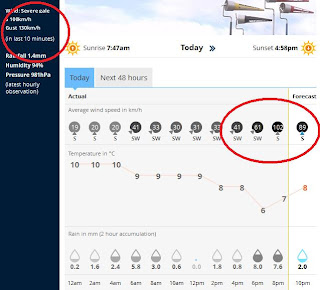 Around about this time the Kaitaki Interislander broke it's moorings after a particularly strong gust and went for a wander around the harbour, while roofs, trees and fences did the same all over the region, and the sea rose up and smashed south facing beaches in the face. I'd like to say I had some heroic storm stories about battening down this, or rescuing that but I don't. I went out for a careful look around the main street of my suburb to see what was going on, saw the blacked-out suburbs in the valley below, then just sat in my study and watched the storm unfold on-line, while listening to the roar of wind and rain and watching the glass on the windows bending inwards to a degree I had never seen before. Then forcing myself to not watch the glass bending in.

Watching it on social and news media was interesting as a collective experience, as stories and events were relayed in real-time. Before this era you just hunkered down and waited until it blew over to find out what had happened, maybe keeping up with whatever made it to the radio. Now you know what's going on as it happens, including those using their phones to stay on-line after their power dropped out.Watching one suburb after another around us (but not us, since the power lines in my suburb are underground) lose power it occurred to me that this was the worst storm since at least the mid-80's. That storm in 1985 I remember waking up to dad cooking breakfast on a camp stove on top of the dead oven. As it turns out it was one of the worst in 50 years, breaking into that rare category of being genuinely comparable to the Wellington storm that is still the yardstick that local people compare storms to.

We suffered no damage at our place, but a house around the corner from us suddenly found it's roof sitting in the street instead of atop the walls. The possibility of unwelcome things happening to my house though kept me up until I saw the winds start to abate a little to regular storm strength. After that it was just a case of waiting until morning to see what the storm hath wrought.